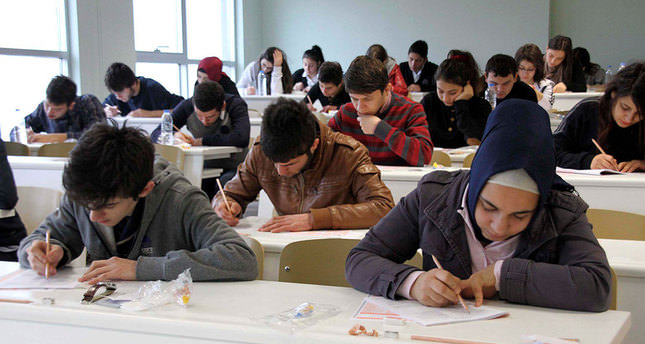 by daily sabah Mar 21, 2014 12:00 am
ISTANBUL — More than two million students competed for acceptance to universities in Sunday's Transition to Higher Education Exam (YGS), the first stage of the university entrance race. Nationwide exams will be changed in the coming years as the current format is considered to have major shortcomings in evaluating students' knowledge and skills. The exam was taken by 850,000 secondary school students and nearly 1.24 million secondary school graduates. A series of measures were taken for the exam. To ensure a calm atmosphere for students, parents of students and cars will not be allowed into the courtyard of schools where the exam will be held.

This year's exam was held one week before local elections. As such, election rallies and other noisy events were banned throughout the five-hour exam.

University entrance exams, a tribulation for students, might be gone for good. The Ministry of National Education plans to abolish the oftchanged exam system with a series of exams focused on students' skills and knowledge in one field instead of having to study all subjects.

The Ministry of National Education plans to replace two-stage university entrance exams with a series of exams held throughout the semester.

The move, a major overhaul in the system, aims to improve assessment of students for university acceptance. It will also spare the students from the stress of studying unrelated subjects to win admission to an institution of higher learning.

Nationwide university entrance exams were first introduced in 1974 as the number of students applying for universities increased. Previously, universities used to hold their own exams to choose the applicants, and sometimes they would admit students without an exam at all.

The exams organized by the Higher Education Council (YÖK) have been subject to numerous changes. Changes focused mostly on the number of questions and failed in terms of facilitating students' entrance to universities.

Rather, they frustrated hopefuls who strove to study the field they preferred. However, a confusing grading system based on overall performance in the exams forced many students to study in fields they did not want in the first place. For instance, a student who wanted to study medicine found himself or herself placed in a mathematics department when he or she did not receive the high grades required for medicine. This was due to grouping questions for students choosing either field in the same exam and a restricted list of universities for students from which to choose.

Under new plans, the exams will be replaced with a series of exams during students' final year in high school or from the first year to the fourth year of high school. The Ministry of National Education is working in coordination with YÖK and the Student Selection and Placement Center (ÖSYM) to replace the current university entrance exams by 2016.

The first option has high schools students in their senior year taking exams in five subjects every two months throughout the academic year. Prospective college students will therefore be able to apply to universities using the highest marks achieved in one exam.

The second option that the Ministry proposed would allow university entrance assessments to be based on testing scores that high school students accumulate from freshman year through senior year.

The exams would include essays along with multiple-choice standardized tests. Through the changes, the Ministry aims to help students focus on the subject in which they are interested or talented. Apart from that, marks the students achieved throughout high school and their accomplishments in extracurricular activities such as arts and sports may be included in scoring.

The ministry's plan to change the university entrance system came on the heels of a bill approved by Parliament that will abolish prep schools. Prep schools, offering paid classes for students preparing for exams, will be closed or converted to private colleges by 2015. In response to concerns that students will be deprived of the opportunity to take prep courses, the Ministry recently announced that the courses would be offered to students free of charge by the state.

Currently, the exams have two stages. In the first stage, the Transition to Higher Education Examination (YGS), students have to answer 160 questions in the fields of Turkish, mathematics, social sciences and physical sciences. If they pass any field exam by securing 180 points or above, they will be eligible for the next stage called the Undergraduate Placement Examination (LYS). With scores they have achieved in the YGS, they will be able to choose two-year vocational colleges or they may take the next exam for four-year undergraduate education.

Turkey's trouble with the exam echoes the challenges that American students faced with the Scholastic Assessment Test (SAT). Before the implementation of various changes, the SAT, required for admission to almost all U.S. universities, was a maligned exam for a number of reasons. The SAT questions drew complaints for being about topics students did not encounter in high school. Students also used to complain about the scoring of questions, as they were docked one-quarter point for every question they answered incorrectly, leaving them to choose which questions were worth answering or leaving blank to not to risk diminishing the overall score. This led to students pouring money into expensive private courses and tutors, and students from impoverished families found themselves disadvantaged. In 2012, U.S. officials started working on a new version of the SAT that would accurately measure students' achievements and how well they were prepared for university. This new version will be implemented in 2016. The new SAT will be a three-hour exam scored on the old system with an optional essay section added. The exam will include questions focused on what officials call "evidence-based reading and writing."

Instead of standard questions with answers such as dates of important events, students will be asked, for instance, what they derive from an essay or excerpts from historical speeches. SAT officials believe this will encourage students to back up their answer with the essential knowledge they have on the subject, rather than confining them to one answer.