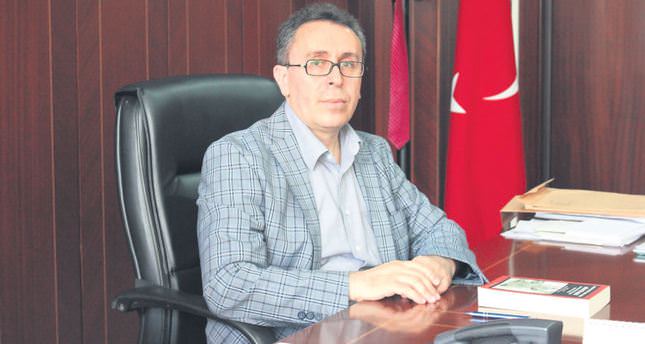 As democratic reforms take place paving the way for an open society, graduate level theological studies program in English is expected to start in Istanbul University which will not only contribute to the transmission of knowledge but is also expected to combine elements of Western academic traditions with those of Islam

In an interview with Daily Sabah Dr. Mürteza Bedir, the dean of Istanbul University's Faculty of Theology, has expressed that religious education in Turkey has a long history dating back to the medieval period and noted there is an accumulation of hundreds of years of knowledge which has been stuck within the borders of the country due to the fact that academic research has been conducted in Turkish only. Istanbul University, deemed to be the largest university in Turkey was established in 1900 by Sultan Abdülhamid II as the Darülfünun, which translates into "university" when he incorporated a number of different faculties like medicine, theology, mathematics and political science under a single roof. According to Dr. Bedir there were madrasahs in the Ottoman Empire at this point but it is evident that there were serious discussions about studying religion from a contemporary perspective with a scientific approach. Ulum-u diniyye, known as the faculty of theology was one of the faculties in the university. However, following the declaration of the Republic in 1923, madrasahs were closed for good in 1924 and some of the teachers were transferred to Darülfünun. Likewise, in 1933 a series of reforms were carried out to establish Istanbul University along with the faculty of theology.

"There was no education in the faculty of theology or higher education of religious studies from 1933 to 1949" Dr. Bedir stated, who noted in 1949 it was transformed into an institution within the faculty of literature. It is evident that one of the reasons for this was due to the Republican People's Party's (CHP) anti-religious approach seen by their prohibition of religious education, the closing of madrasahs and dervish lodges and forcing the call to prayer to be made in Turkish instead of Arabic. Various speeches made by CHP deputies and minister during this period show that the need to establish faculty of theology stemmed from the desire to have complete control and autonomy over religious education. Accordingly, from 1948 to 1982, only a single university offered theological education in Ankara. Religious education received a serious blow with the September 12, 1982 coup d'état, when the Council of Higher Education (YÖK) was established and converted the existing Islamic institutions into faculties, totaling twelve.

The 1990s also experienced a crisis in theological education with the February 28 postmodern coup posing a direct threat to not only faculty of theology but also religious education in Turkey as a whole. A series of restrictions were imposed on these faculties, negatively affecting the number of students who could enroll and attend these institutions.

On the other hand, there were numerous inconsistencies and deficiencies in curriculum, leading a portion of students to become teachers while the rest were left out. Others were negatively affected as they did not have the necessary theological and practical education required to perform at the Directorate of Religious Affairs. Dr. Bedir notes this was especially evident in Istanbul University as the faculty of theology has been inactive for numerous years due to the lack of academic staff and students. However, "Istanbul University was the last to normalize and the fastest to grow" said Dr. Bedir, who expressed the growth was a direct result of democratic reforms as well as the country's new foreign policies which enabled the formation of a 5-year undergrad theology program in English, followed by the master's program in theology offered in English.

The dean also argues that Turkey's accumulation of scholarly knowledge has attracted everyone's attention throughout the world and aims to establish more global cooperation and transmission of knowledge in this respect. He noted it was especially important as Muslims throughout the world to communicate in English, as academics often complained about the fact that the research conducted in Turkey was mainly in Turkish and they were unable to access this information. "This program will open Turkey's doors of knowledge to the globe" said Dr. Bedir, who explained the formation of such a program will respond to the demands of universities from across the world including the ones in Sri Lanka, Malaysia, Pakistan and especially the countries who consistently call for cooperation and coordination programs. What makes Turkey special according to Dr. Bedir is its ability to communicate with the East and the West as he claims intellectuals from the East and the West feel comfortable when they come to
Turkey and speak to audiences, as they are all welcomed. On the other hand, the religious education offered here is not Salafi in its disposition and includes subjects like philosophy, kalam and tasawwuf, which are mainly looked down upon in many Arab countries.

More importantly, Dr. Bedir also noted the establishment of a grad program in theology will allow them to address the need for textbooks in the field
of Islam. Research findings also suggest Islamic religious education throughout the world demands textbooks as the number of Muslims in Europe alone has surpassed 20 million and there is a serious lack of variety when it comes to choosing Islamic education material.

Speaking about the significance of establishing a master's program in theology in English, Necmettin Kızılkaya, an assistant professor at Istanbul University stated such initiative is not a novel phenomenon as it is rooted in the Islamic tradition when knowledge was consistently transmitted amongst different empires, sultanates and regions during the Medieval period. These included Nizamiyyah institutes (madrasahs), Al Azhar University in Egypt and more. These institutions did not only focus on teaching theology but also taught law, sciences, mathematics, philosophy, politics, logic, linguistics, rhetoric, astrology and more. They did not only transmit knowledge but also allowed the exchange of cultural values in places of learning including Andalus, Yemen, Cairo and Damascus. However, Dr. Kızılkaya noted these places are currently in turmoil and suffer due to unrest and Istanbul has the potential to become a contemporary center for theological studies.

"As far as Turkey's contemporary history is concerned, we mostly sent people to study theology abroad even though Turkey has the potential to offer such education to others" said Dr. Kızılkaya, who expressed Turkey has a serious potential and that they desire to reinvigorate this potential by offering the program in English. More importantly, he notes what makes them different from Western Islamic studies programs is that their instructors do not have a colonial or orientalist mindset and are not studying the "other" while they have received their education in the West and can easily combine the best of both traditions under a single umbrella. "We plan to transfer the existing knowledge present within Islamic sciences and revive what has long been overlooked" said Dr. Kızılkaya, who noted they also plan to cooperate with different universities and faculties abroad for joint programs, conferences, workshops and more.

Istanbul University, deemed to be the largest university in Turkey was established in 1900 by Sultan Abdülhamid II as the Darülfünun, which translates into "university" when he incorporated a number of different faculties like medicine, theology, mathematics and political science under
a single roof.
RELATED TOPICS