Millions back to school with less burden, more security 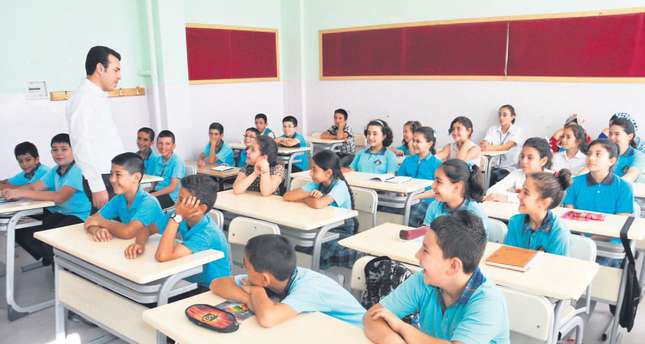 Over 16 million Turkish students, more than the population of many European Union countries, started the new school year yesterday, with longer recesses and security measures against the drug threat

The new academic year began yesterday for more than 16 million students at grade schools and high schools across Turkey after a three-month summer break. The new year comes with a series of novelties for students, such as changes in homework and extended recesses. In addition, counternarcotics teams from the Turkish National Police will patrol in the school's vicinity looking for drug peddlers.

Determined to reform Turkey's crippled education system, the government is continuing its overhaul by introducing new regulations to improve the performance of students. "Performance homework" to evaluate the student's success in any given subject has been replaced with a scoring system that will assess how successful a student is by measuring their participation in lessons. The Ministry of National Education will also open paid courses for students as part of extracurricular activities such as fine arts, sports and foreign languages.

Another novelty for the new school year is a decrease in school hours. Weekly course hours were decreased to 35 from 37 for high schools, while recesses were extended to at least 10 minutes from the previous five minutes. The ministry also plans to amend the reassignment of teachers at grade schools, following parents' complaints over frequent reassignment of teachers. Teachers will not be subject to reassignment for four years at least under the new plans.

Drug use among high schoolers remains a major concern for the authorities. To combat the threat of drug peddlers, Turkish National Police will deploy counter-narcotics police officers, both in uniform and plainclothes, outside schools and their vicinity against drug dealers that prey on the students. They will patrol in the vicinity of schools daily, and a police officer will be assigned to every school to look into security-related cases.

Turkey is currently beleaguered with the threat of "bonzai," a cheap and easily accessible cannabinoid drug popular among youths. The government also ordered an inspection of businesses near the schools such as restaurants and cafes for hygiene. Abandoned buildings near schools, where drug addicts often squat, will be demolished as part of security measures for students, while areas around the schools will be fully equipped with security cameras. Minister of National Education Nabi Avcı attended the launch of the new school year at a vocational high school in the capital Ankara.

Speaking at a ceremony there, Avcı said they would prioritize vocational education, which has been neglected by the state in the past. "Those schools used to face discrimination for reasons we do not want to remember though they were home to successful teachers and students," Avcı said. He was referring to the anti-conservative mindset prevalent in the Turkish state in the 1990s that culminated in the so-called "postmodern" military coup in 1997. İmam-hatip schools, a type of vocational school that teaches Islamic theology along with the curriculum of regular high schools, were either shut down or their school years were shortened during that process. Their status was downgraded so as to prevent imamhatip graduates from earning sufficient marks for university admission exams. Noting an end to this discrimination that unfairly targeted all types of vocational schools, Avcı said they adopted a strategy to make those schools more up-to-date with technological developments and cooperation with the private sector.

Students will have seen in the new school year either with the excitement of reuniting with classmates or with the reluctance of going back to the classroom after a summer break.

Adults were the only ones frustrated by the end of summer recess, especially in Istanbul, the country's most populated city. Heeding the call from local authorities to avoid driving to work, Istanbulites took to mass transit, which were free from morning to noon, only to travel in over-packed buses. The bridges connecting the two sides of the city saw heavy traffic in the early hours of Monday. Other main roads in the city had relatively low traffic although it peaked at times due to commuters driving to work, despite warnings.
Last Update: Sep 16, 2014 3:57 pm
RELATED TOPICS