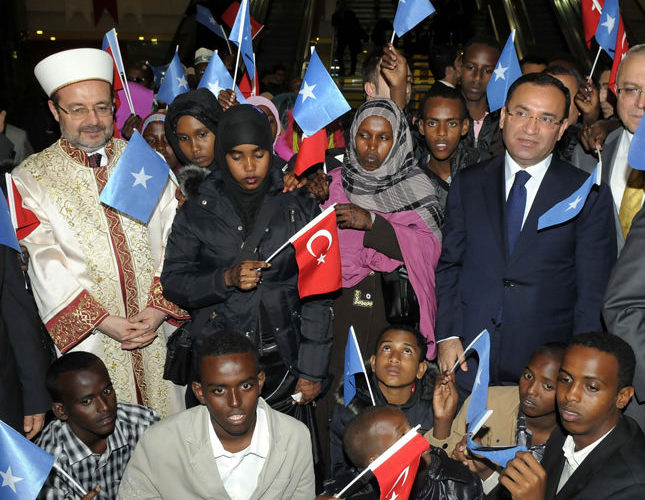 During the press conference that took place with the participation of Abdülsamet Ahmed, the owner of Shamsudin Private High School in Somaliland, the Manager of the center Fatih Cebeci said that their SDÜ Life Long Education Center has become one to the most important education centers in Turkey and they will continue their serious works in the future.

Stressing that YBEM takes part in many domestic education projects as well as international ones, Cebeci stated, "YBEM is an education institution which invests in three continents. We have begun to see the results of our hard work." Within their international projects, the center opened an office in Bagdad and offered education for undergraduate and graduate students. Moreover, YBEM's collaborations with Bulgaria and Sudan continue.

Cebeci who noted that they kicked off projects in Africa informed YBEM have started to take action in Africa following the studies and researches in the region. "35 students coming from Somaliland will learn Turkish and receive their undergraduate in our center. We will also oversee their master's degrees and PhD studies. As a part of the second phase of our program, we will open an office in Somali within the frame of the education vision that President Recep Tayyip Erdoğan Erdoğan put forward." He said that they have already completed their preliminary examination and given a boost to their works in Africa. "We believe that Süleyman Demirel University will be recognized in the international education arena with its vision," he added.

On the other hand, Ahmed noted that the Ottoman Empire built new cities in their country during the late 19th century. He stated that the presence of Turkish government should be felt in Somaliland with its every institution and continued, "We toured Süleyman Demirel University and we are very impressed. I have been living in Europe for the last 26 years. I visited many universities especially in the U.K and France but SDÜ stands out among many others. Our biggest desire is to open such a university on our lands."

Turkey has been providing educational support to Somali students for many years. In 2012, a project launched by the Presidency of Religious Affairs and Turkish Religious Foundation that enabled up to 440 Somali students to get an education at Turkish universities and high schools.

Turkish support for Somalia is not limited to education. Last week, President Recep Tayyip Erdoğan visited Somalia during as the part of his official visit to the Horn of Africa and attended the official opening of a 200-bed Somalia-Turkey Training and Research Hospital in Mogadishu and the opening of the terminal building of Mogadishu's international airport, both of which were completed with significant contributions from Turkey.

Somali President Hassan Sheikh Mohamud also gave a speech and acknowledge the Turkish support for the education of Somalis and remarked that many Somalis are currently being educated in Turkey.

Despite numerous challenges such as the threats posed by terrorist organization, Turkish nongovernmental organizations and the business community are making significant contributions for the development of Somalia. Since 2011, Turkey has contributed more than $500 million to Somalia for its humanitarian needs, health, education, infrastructure, security and capacity building.