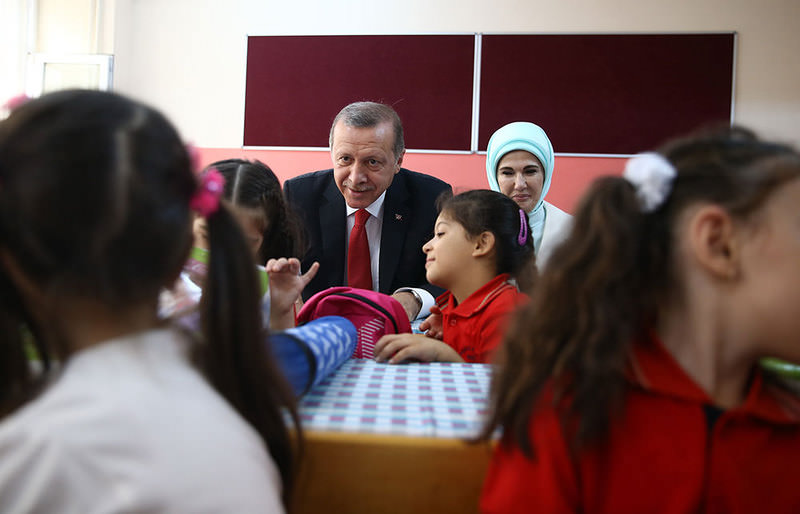 by daily sabah Sep 28, 2015 12:00 am
Speaking at a ceremony inaugurating the new school year at an imam hatip school in Istanbul's Kadıköy district yesterday, President Recep Tayyip Erdoğan – who spearheaded FATİH, a project working to increase the use of technology in classrooms during his tenure as prime minister – vowed to boost the number of tablet computers delivered to students and teachers to 10 million from the current 900,000.

Citing reforms under his past government to modernize classrooms and education, Erdoğan said schools have been equipped with 1 million computers while the ambitious FATİH project saw approximately 187,000 interactive boards replace traditional blackboards in classrooms.

Erdoğan had launched FATİH in 2010, and has personally delivered computers to students at ceremonies since then, in a bid to promote a more interactive education. The government aims to deliver 10 million tablets to students and teachers by 2020.

FATİH, which also means conqueror, is an acronym for Fırsatları Artırma ve Teknolojiyi İyileştirme Hareketi (Movement to Increase Opportunities and Technology). As part of the project, tablets interact with smart blackboards in classrooms. The project aims to make learning fun and lessons more comprehensive, thanks to online accessibility.

Produced locally, the tablets have 2 GB of RAM and 32 GB of internal memory. They boast a 10.1-inch high-resolution screen, Wi-Fi connectivity and a camera. They also come with educational apps pre-installed.

Increasing the use of tablet computers is among Turkey's efforts to reform its education system, which also includes implementing new exams, 12 years of compulsory education and a reduction in the number of crowded classrooms, which is an issue that has plagued the country's crumbling education system.