Teachers undeterred in face of terror threats in southeast Turkey 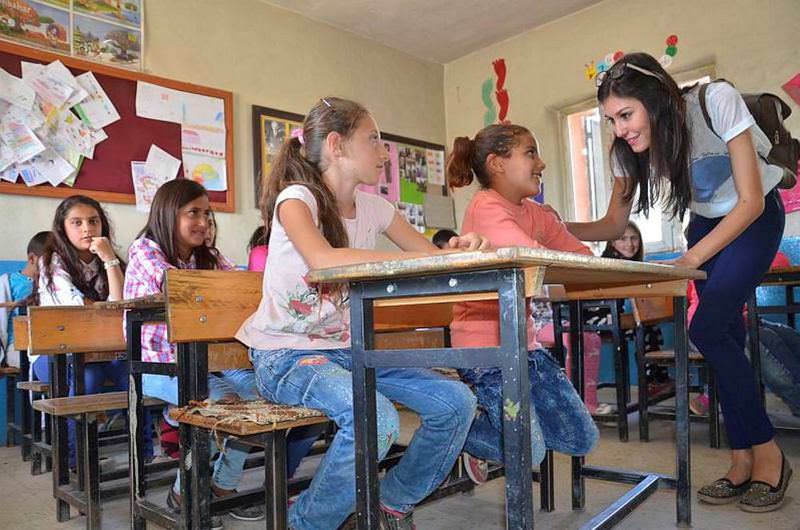 Teacher meeting her students in Hakkari where she is assigned this year. Yasemin Gu00f6ktau015f (above) said she is happy to teach in the southeast and called on her colleagues to abandon prejudice about the region.
by Daily Sabah with AA Oct 03, 2015 12:00 am

Despite terrorism disrupting daily life in southeastern and eastern Turkey, educators remain undaunted in their struggle to educate regions' youth, where literacy rates are low

For a civil servant or a member of law enforcement, being assigned to a city in southeastern or eastern Turkey, which has long been synonymous with underdevelopment and terrorism, may be a daunting task. Still, many ignore the ongoing threat of terrorism by the PKK, which has killed dozens of security officers and civilians since it launched an offensive in two regions this summer after a lull of three years.

Teachers are at the forefront of efforts to bring public services to the regions where literacy rates are low and have been long neglected by past governments amid security concerns. As the school year started on Monday, they joined their students at schools all across southeastern and eastern Turkey, braving potential terror attacks as the PKK recently targeted several schools.

In Şemdinli, a district of some 63,000 people in the province of Hakkari, Nefise Sapmaz met her students in a remote part of the district surrounded by steep mountains, which have served as hideouts for PKK terrorists at times. The young teacher hailing from the southern city of Adana, nearly 1,000 kilometers away from Hakkari, had felt anxious after she learned about her assignment to a small school in Derecik of Şemdinli. "But I received a warm welcome from locals. They are very helpful. It wasn't like I imagined," Sapmaz told Anadolu Agency, urging other civil servants not to feel scared.

"This is a part of our country as well and people here are in need of public services the most. I am happy to be able to serve them," Yasemin Göktaş, another teacher, says. Göktaş says her colleagues should not be prejudiced about the region.

Zeynep Göktepe from the capital Ankara is among 240 teachers assigned to Şemdinli this year and she says the district is "better" than she thought. Like her colleagues, she describes the locals as sincere and warm, countering rumors that locals are supportive of the terrorist organization.

According to a survey by the Education and Science Workers' Union (Eğitim-Sen), a labor union of teachers, more than half of teachers working in southeastern and eastern Turkey are not willing to be reassigned to other parts of Turkey, though most believe that terrorism threats are disruptive to education. The union interviewed 1,087 teachers working in 10 provinces in two regions where 67 percent of new teacher assignments in Turkey were made this year. Kamuran Karaca, head of Eğitim-Sen, said at a recent press conference that some newly assigned teachers were concerned about the ongoing terrorism, but 59 percent of interviewed teachers were not considering asking for a new assignment to western regions.

Education is a key component of the government's policies to end the decades of terror. Although the government-sponsored reconciliation process to end terrorism and restore the rights of the Kurdish community prevalent in the region were frozen due to renewed PKK attacks, the government is determined to keep the schools staffed. The highest assignment rate was in Şanlıurfa, a southeastern province with 4,640 teachers assigned to schools across the province. It is followed by Van in eastern Turkey with 3,207 teachers.

Meanwhile, terrorism remains a threat to education with the PKK increasingly targeting schools in two regions.

In the past few weeks, a high school in the eastern city of Van was the scene of a bomb attack followed by gunfire. An explosive device was found near a primary school in the same district. In Diyarbakır, a southeastern city, five children were injured when a bomb planted by the PKK exploded.

In Diyarbakır's Yenişehir district, a homemade explosive was found at a school two days after the school year started. The bomb was planted on the window of the library at the school where 1,500 students attend and was defused by police after teachers noticed the device.
RELATED TOPICS