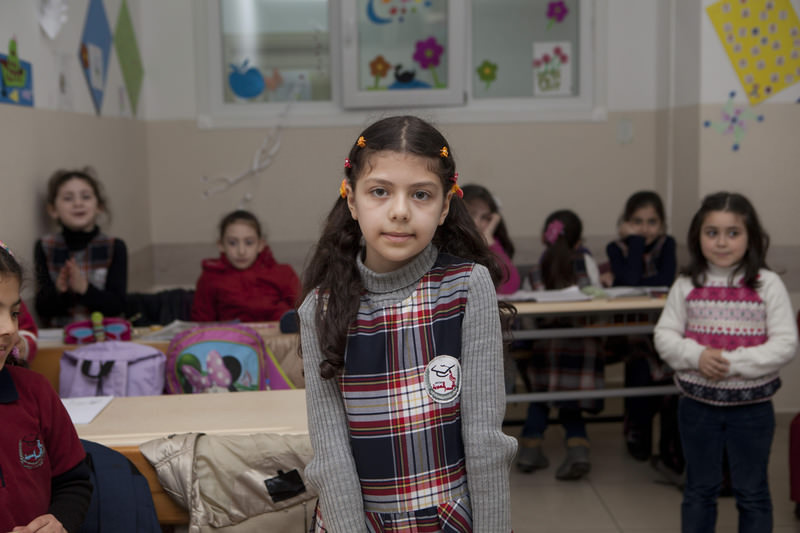 by Daily Sabah Oct 06, 2015 12:00 am
The National Education Ministry and UNICEF's Turkey branch launched city action plans to improve Syrian students' access to education, support the most disadvantaged Turkish and Syrian children and increase the quality of education in certain regions where Syrian refugees are densely populated. The launch event took place at Fatih Sultan Mehmet Primary School in Ankara with the participation of Yusuf Büyük, the deputy secretary of the National Education Ministry and UNICEF Turkey representative Philippe Duamelle. Büyük said that Turkey carries out many projects to meet the educational requirements of Syrian refugees taking shelter in Turkey with the help of stakeholders. "We aim to build a bright future for Syrian children and save their lives," he said. So far, thousands of Syrian children have accessed education. The ministry aims to reach more students until the end of the 2015-16 academic year. "This is because city action plans are of significance to achieve our projections," he said. Aside from education, Syrian students are also offered psychological counseling. Almost 30 schools were built for Syrian students and certain schools opened their doors to Syrian students and volunteer teachers in afternoons. As part of the protocol between UNICEF and the ministry, 6,000 Syrian teachers have been encouraged to provide education to Syrian students. "They work on a voluntary basis and we encourage them," he said. Those working in refugee camps receive $150 each month, while others working outside camps earn $220. "We continue our projects to increase both the number of teachers and their earnings," he said.

For the last four years, Turkey has taken in many Syrian refugees regardless of their language and religion. There has been almost $8 billion spent for refugees and Turkey has received $417 million of aid from other countries. Büyük said that the equivalence problem regarding the Syrian students has been solved and 41 percent of the 7,000 Syrian high school students who entered the National Education Ministry's exam have been successful.

He said that these students will continue their education in Turkey as well as other universities around the world within the limits of the student quota, and continued: "Syrian high school graduates do not use the quota for students who are Turkish citizens, but use a separate quota announced especially for Syrian students by the Presidency of the Higher Education Board (YÖK). The Presidency for Turks Abroad and Related Communities (YTB), which offered 1,500 scholarships for Syrians in the previous year, will now provide scholarships for 5,000 Syrian students. Hence, we are encoring students to continue on to university education."

Speaking at the ceremony, Duamelle, UNICEF's representative for Turkey, said: "Education is not only a fundamental right for children, but also an important issue for them to get through the hard times they have been experiencing. It is also important for the fut

ure of Syria as well as the region. We will continue to support the Turkish government's initiatives to bring Syrian children into education institutions and help them to enlarge the access area of high quality education through various action plans. This is a moral imperative that concerns all of us. We are all obliged to offer education to as many children as possible." Duamelle said that over 200,000 Syrian children are receiving education in Turkey and that schools opened their doors to these children thanks to initiatives taken by the National Education Ministry. He also pointed to interim Prime Minister Ahmet Davutoğlu's speech at the U.N. General Assembly where he said that Turkey will double the number of Syrian students attending schools, and continued: "We are supporting this ambitious goal. We are ready to offer any support necessary to the Turkish government." Following the speeches, Büyük and Duamelle signed the action plan and protocol and distributed backpacks to the first graders.
RELATED TOPICS