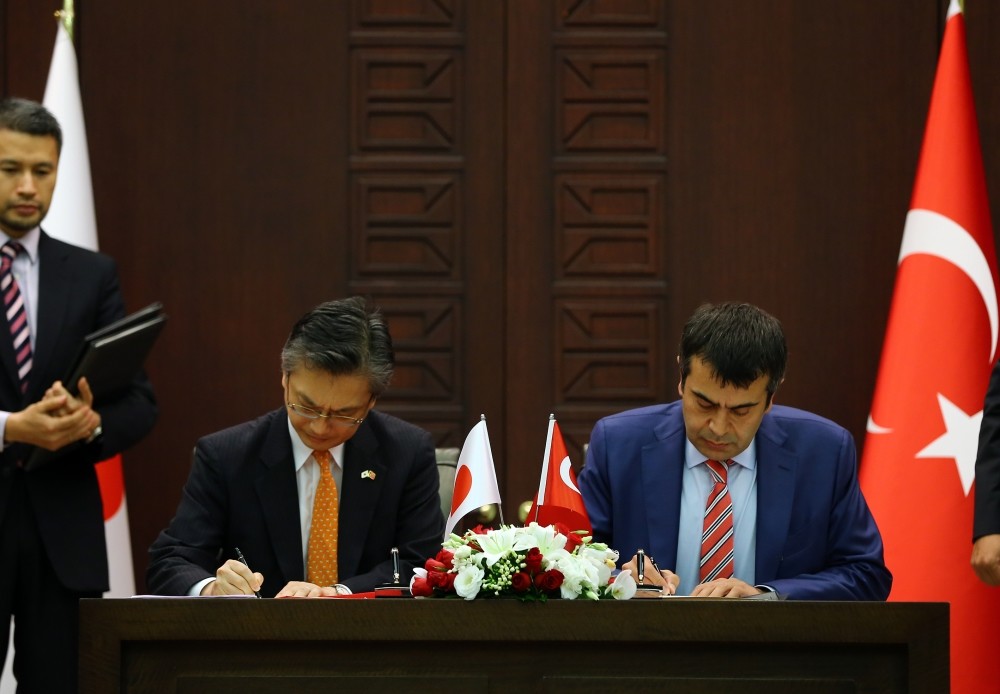 The Japanese ambassador to Turkey, Hiroshi Oka, (L) and and National Education Ministry Undersecretary Yusuf Tekin signing the agreement.
by Compiled from Wire Services Jul 01, 2016 12:00 am

Turkey and Japan will join forces on science and technology through a new university they will establish together. Officials from both countries signed an agreement in the capital Ankara Thursday for the foundation of the Turkish-Japanese University of Science and Technology.

The university is planned to be built in or near Istanbul, in an area of 1,000 acres. Though no concrete details are available, government officials recently said it would be located in an area near IT Valley, a technology hub under construction on a major road connecting Istanbul to industry hub Kocaeli. Japanese and Turkish academics will work together at the university and academic, student exchange programs between the two countries will be enacted.

Speaking at the ceremony, İsmet Yılmaz said the university would make significant contributions to technology and science, both for Turkey and Japan. Yılmaz said the two countries were "genuine friends, brothers and sisters" adding that the friendship between Turkey and Japan, on two far sides of Asia, dated back centuries. "We have the same colors in our flags and Turkey has the moon and star in its flag while Japan has the sun, so, just as Japan views itself as the rising sun of the east, Turkey regards itself as the rising star of its region. Now, the sun and star will join to contribute to science, technology and world peace," he said.

Kalın, who chaired the talks on behalf of Turkey for the establishment of the university, said he hoped the university would produce good results. "The idea of a joint university was the reflection of a global vision by President Recep Tayyip Erdoğan and Japanese Prime Minister Shinzo Abe. Undoubtedly, this university will have an exceptional place in Turkish-Japanese relations spanning a few centuries. It will bolster friendly ties between our countries and may open new doors for both," Kalın said. He added that their deep-rooted relations were reflected in a range of areas from joint work on the Marmaray (Bosporus underwater tunnel) and bridge projects in technical areas and to diplomacy following the sinking of the Ertuğrul, the Ottoman frigate, off the Japanese coast. "This university is a continuation of these close ties and it will be a prominent institution in the world. Considering Japan's experience (in science and technology) and Turkey's growing economy and global perspective, we hope this university will be a center of attraction in its own field," he said. The establishment of a joint university was first voiced by President Erdoğan during his visit to Japan last year.

Japanese Ambassador Hiroshi Oka, who commenced his speech at the ceremony with condolences to the victims of the terror attack in Istanbul's Atatürk airport, said he was honored to sign the agreement for the university "that means a lot for Turkey's development." "We established a relationship of trust and friendship while working on this project and I hope our work will continue that way and ties between our countries will be further strengthened thanks to this university," he said.

Japan is a main partner with Turkey especially in infrastructure projects including the İzmit Gulf Bridge, a major suspension bridge that will cut travel times between Istanbul and other cities, which was scheduled to open later yesterday, as well as Marmaray, the first underwater tunnel connecting the two sides of the Bosporus. Japanese Prime Minister Shinzo Abe said in an earlier interview with Daily Sabah that Japanese businesses would contribute to ambitious infrastructure projects from bridges to power plants, to train lines and communication satellite projects, which are in the government's "2023 program." Turkey seeks to wrap up several mega projects ranging from bridges and a new canal in Istanbul by that year, which will mark the 100th anniversary of the foundation of the Turkish Republic. Struggling for economic growth and a larger role in the global community, the country seeks to expand its international partnerships in such projects.
RELATED TOPICS