Proud of the profession, Turkish teachers mark their day 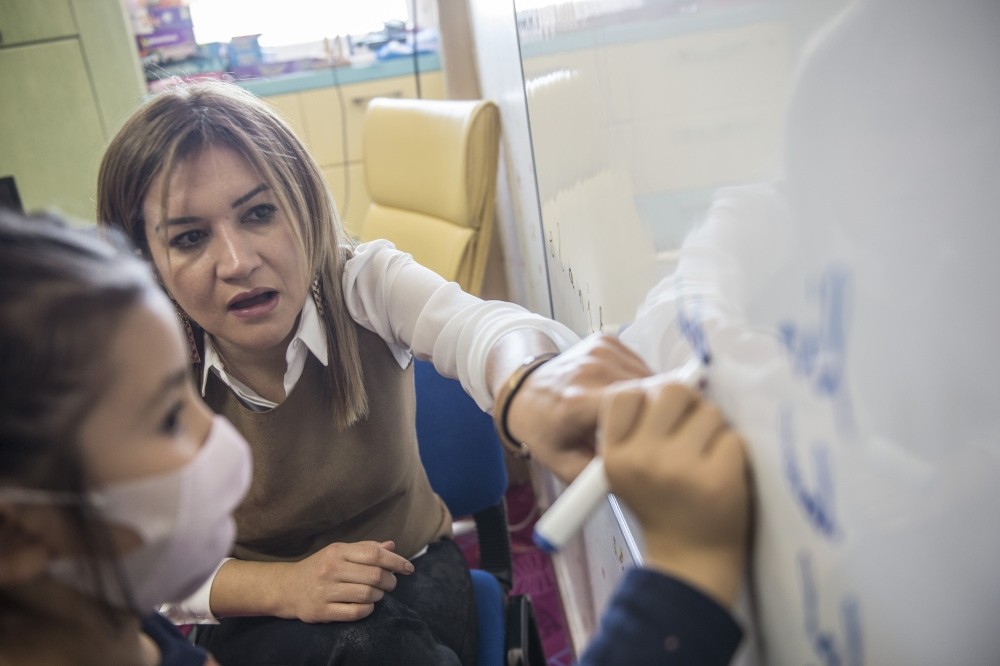 Nesibe Gerek volunteers for teaching for young patients at a classroom set up at a hospital in the city of Gaziantep.
by Daily Sabah Nov 25, 2016 12:00 am
About 1 million teachers in Turkey yesterday have marked Teachers' Day, a day dedicated to a profession considered "sacred" in society.

A survey by a the teachers' labor union shows most teachers are "proud" of their profession although they complain of their limited role in shaping the country's education policies.

President Recep Tayyip Erdoğan and Prime Minister Binali Yıldırım hosted teachers from around the country in Ankara for events to mark the day, while students everywhere presented gifts to their teachers on the occasion.

A survey by the Eğitim-Bir Sen labor union shows 77 percent of teachers interviewed felt proud of their profession while a 83 percent believe they have an impact on the lives of others through teaching.

Still, more than half feel the public ignores their problems while more than half thinks they have no role in education policies of the country. Ali Yalçın, head of the union, says teachers are underpaid and are in need of education to boost their occupational development.

A report by the Organization For Economic Cooperation and Development (OECD) shows that in contrast to other member countries, statutory salaries for teachers in Turkey are higher than the average salary for "full-time, full-year tertiary-educated workers." The report says teachers' salaries increased by 21 percent between 2005 and 2014, higher than many other OECD members.A challenge plaguing teachers is the unavailability of jobs in the face of the rising numbers of university graduates. Teachers have to wait for years for an assignment and daunted by unemployment, some prefer working in other sectors. The Education Ministry has assigned some 50,000 teachers this year so far and pledges to assign more in the near future.

Addressing teachers in Ankara, Prime Minister Binali Yıldırım, the husband of a teacher hismelf, said his government and past governments of the Justice and Development Party (AK Party) have boosted investment in education. Yıldırım also boasted of assigning 561,000 teachers since the AK Party first came to power 14 years ago.President Erdoğan, who served as prime minister in previous AK Party governments, told teachers he hosted at the presidential palace that they prioritized education in their goals for the development of Turkey.

"We had a huge shortage of teachers and we covered it with new assignments," he said.

Erdoğan said they also managed to decrease the number of students per classroom, which has been a burden for teachers for decades.
RELATED TOPICS