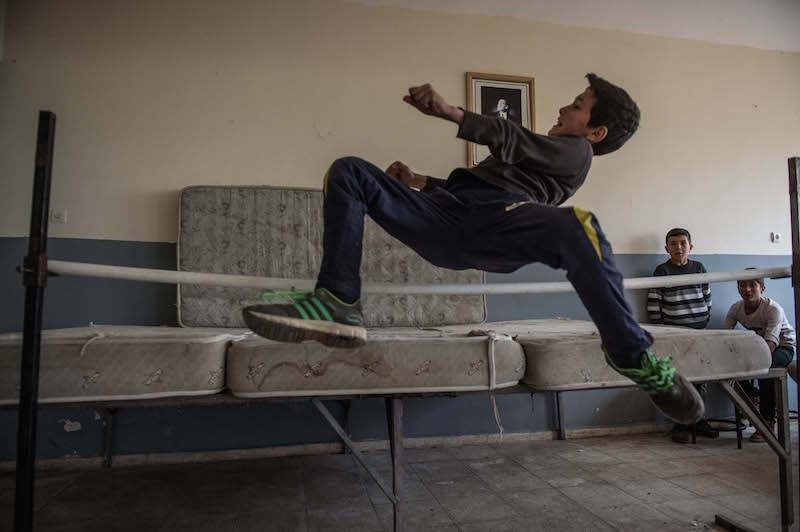 Students in the southeastern Turkish province of Gaziantep have racked up nearly 100 athletics medals after their teacher came up with the idea to train using old mattresses.

Mehmet Ali Taşkesen, a 36-year-old physical education teacher, has been working in Oğuzeli's Yazili Mahallesi, which is located about 25 kilometers from the Syrian border, for four years. He is determined to help his Syrian students find opportunities in Turkey.

Realizing that his student body showcased a lot of athletic talent, Taşkesen decided to take his job one step further and introduce a training program to the students.

The young teacher took unused poles from the school and turned them into a high jump bar, using old mattresses as crash mats.

After school, children from different age groups do warm up exercises on the dusty streets of the village, and then move to the school cafeteria to practice their jumps.

The students have collectively won about 100 medals in regional athletic competitions, which fuels their motivation for realizing new achievements.

Taşkesen told Anadolu Agency that some 350 students were educated at schools in the district.

Emphasizing that the school is trying to provide athletic opportunities for the children using school facilities, Taşkesen said, "When we realized that the children were athletic, we really focused on this."

"We tried to create something using our own resources because of the high cost of materials needed for the high jump," Taşkesen added.

Taşkesen believes in the talents of his students, "Hopefully some exceptional Turkish athletes will come out of this school. I have hope for that. When we achieve this, our labor will have been worth it."