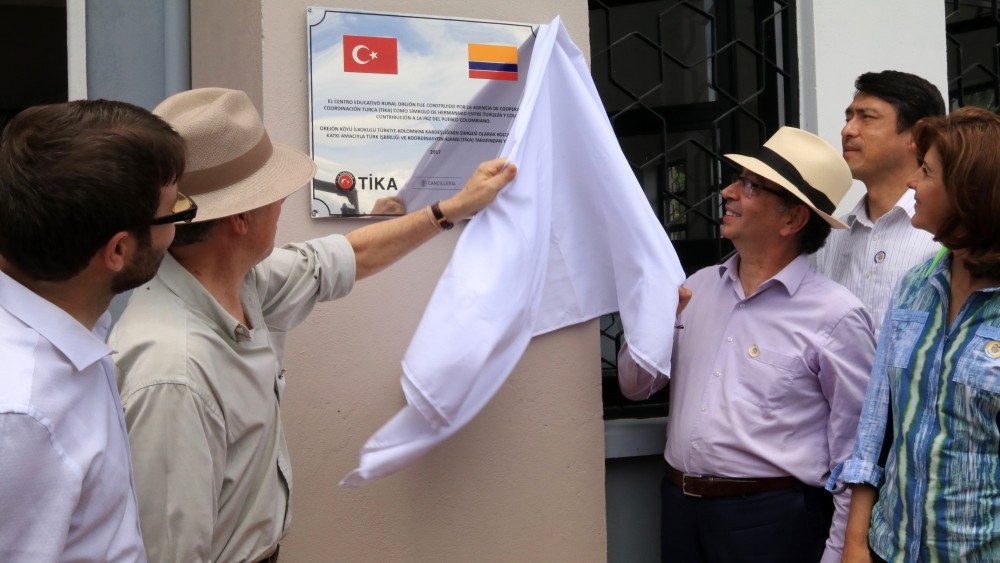 A school in rural Colombia built by Turkey's aid agency opened with a ceremony attended by President Juan Manuel Santos.

The school in the Orejon area of Antioquia, in the country's northwest, the first region to see the benefits of last year's government peace deal with guerrillas, was built by the Turkish Cooperation and Coordination Agency (TİKA).

Speaking at the inauguration ceremony, President Santos conveyed his special thanks for the support President Recep Tayyip Erdoğan has shown to development in his country.

"We thank our friend Erdoğan for sending assistance to this school," he said.

Santos, who won the Nobel Peace Prize for ending years of conflict with Revolutionary Armed Forces of Colombia (FARC) guerrillas, underlined Turkey's support for making peace and thanked the Turkish government and its people.

He added that the school would also become a major employer in the region besides its main purpose of educating rural children.

In the past decade, Turkey boosted its cooperation with Colombia and two countries signed a set of agreements to that extent two years ago when President Erdoğan paid a visit to Bogota.

It was followed by the opening of a TİKA office in the country and the state-run Turkish agency had pledged to help in the post-peacemaking process in Colombia.

TİKA conducts a series of projects to aid in the development of Colombia and most recently in April, it sent food aid to the flood-hit country.

Other projects include supplying electricity to schools, capacity improvement of fisheries and building playgrounds for children.