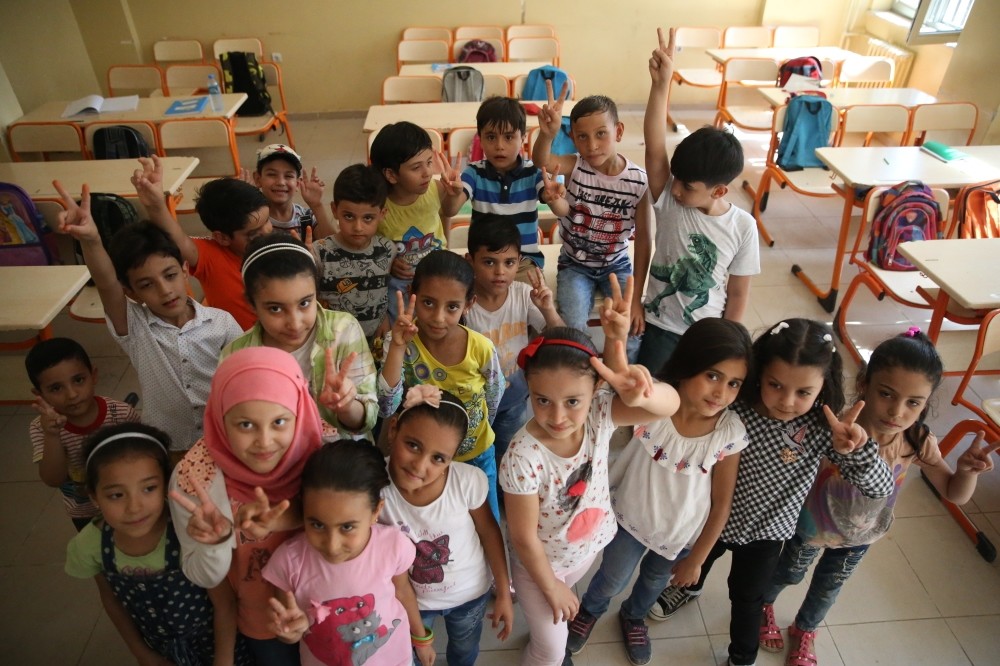 A new project introduced by Turkish and European Union officials focuses on educating the so-called lost generation of Syrian refugees forced to skip their education as they are displaced by the ongoing war in their country.

Under the project, Turkey plans to integrate thousands of children from among the more than 3 million Syrian refugees in the country in the Turkish education system. The European Union pledged 650 million euros for their education.

Turkey already provides education to 570,000 Syrian children and strives to have more enrolled in schools. Some 390,000 children will be taught Turkish as part of the project, which employs 5,496 teachers. Children will also be enrolled in Arabic classes and extra courses to recuperate for school terms they missed when they were forced to leave their country. The project will be held in the 23 provinces that host a sizeable number of Syrians.

At a ceremony in Ankara to introduce the project, Yusuf Tekin, undersecretary of the National Education Ministry, which coordinates the project, said it was vital to minimize the damage of the current crisis by providing an education to future generations.

Mehmet Güllüoğlu, head of the Disaster and Emergency Management Authority (AFAD), which oversees humanitarian aid, said the project, which will continue for two years, should be extended, as "the crisis is still ongoing."

Christian Berger, head of the EU Delegation to Turkey, said Turkey has been exemplary in helping Syrian refugees and the EU is proud to support the integration of Syrian children in the Turkish education system. Noting the EU's financial support since January 2016 for refugees in Turkey, Berger said the project would cover both the education of children and the training of teachers.

Despite ongoing efforts, some 41 percent of Syrian refugee children of school age in Turkey remain out of school due to various factors.

A report published in August by the Foundation for Political, Economic and Social Research (SETA) think tank and Theirworld, an international charity for children, says that language barriers and low international support to Turkey for schooling are the main obstacles to increasing the schooling rate.

Of the 3 million Syrian refugees in Turkey, 833,039 are school-age children aged 5 to 18. A majority are enrolled in temporary education centers set up exclusively for refugee children, while the rest are enrolled in public schools.

Since 2011, Syria has been locked in a conflict that shows no sign of ending any time soon, especially with the emergence of new actors such as the Daesh terrorist group.

Though a low number of refugees have returned to their homeland after the liberation of Daesh-held towns by the Syrian opposition, most are expected to stay in Turkey longer than first expected, experts say.

Children make up a substantial portion of the refugee population that fled their devastated country for Turkey, Lebanon and Jordan and are among the most vulnerable.

The SETA report says that international funding was not sufficient given the need. Citing the Ministry of Education, the report says financial support covers only 10 percent of the current school and classroom requirements in Turkey.