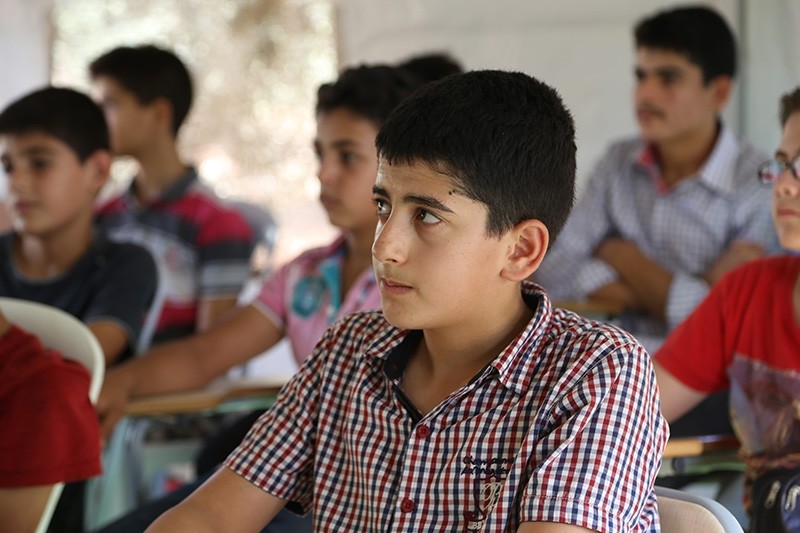 Turkey’s help in restoring peace in Aleppo has not been limited to supporting the opposition. The country has also rebuilt over 400 damaged schools in the region, helping 152,000 children to resume their education disrupted by the civil war

Over the last eight months, Turkey has rebuilt over 400 damaged schools in Syria's Aleppo region, enabling 152,000 children to continue with their educations.

After Operation Euphrates Shield, in which Turkey backed the Syrian opposition against Daesh controlling Syrian towns, Turkey's National Education Ministry launched a restoration effort for 458 schools in Aleppo's Jarablous, al-Bab, al-Rai and Azaz regions and helped to restore the majority of them.

Speaking to Anadolu Agency (AA), the ministry's Lifelong Education Director Ali Rıza Altunel said, "I believe the number of students will increase to around 170,000 by the end of the first semester."

Altunel said the ministry has been running its program since March, after Operation Euphrates Shield was successfully concluded by the Turkish military.

"There were enough primary and middle schools, but a very few high schools," Altunel said. "In March, we only managed to continue with lessons in three schools. By the end of June, the number increased to 103 schools."

The director said the children in the rebuilt regions were "extremely happy with Turkey's contributions," as Syrian children painted banners saying they would continue their education "no matter what." "This reaction makes all of our hard work worth it," Altunel said. The director said the children in the region have been unable to receive proper educations over the last five years. "So, we launched a 'compensation program' for children to make up for the lack of the education," he said. "We are working hard to help the children finish elementary school so they can continue on to middle school."

Syria has remained locked in a vicious civil war since 2011. Since then, hundreds of thousands of people have been killed by the conflict and millions more displaced, according to the U.N.'s figures.

Turkey also considered sending teachers to address the shortage of educators but found it not feasible. Altunel says they have hired 230 teachers of Syrian Arab and Turkmen decent who are fluent in Turkish to teach Turkish to Syrian children in the schools.

Turkey's Maarif Foundation, which operates the country's schools abroad, has also contributed to the process. The foundation has already opened two schools in Jarablus, liberated from Daesh, including one that had been converted into a prison when the terrorist group took over the town. More schools are in the works for other towns saved from the terrorist group. Birol Akgün, head of the foundation, said they build schools to fight against the terrorist groups' recruitment among the disillusioned youth and children. "We build schools so that [Syrian] children will not fall in the 'terrorist trap'," Akgün told Sabah newspaper in a recent interview. Turkish authorities see education as the key in preventing the rise of any ideology associated with terrorists.