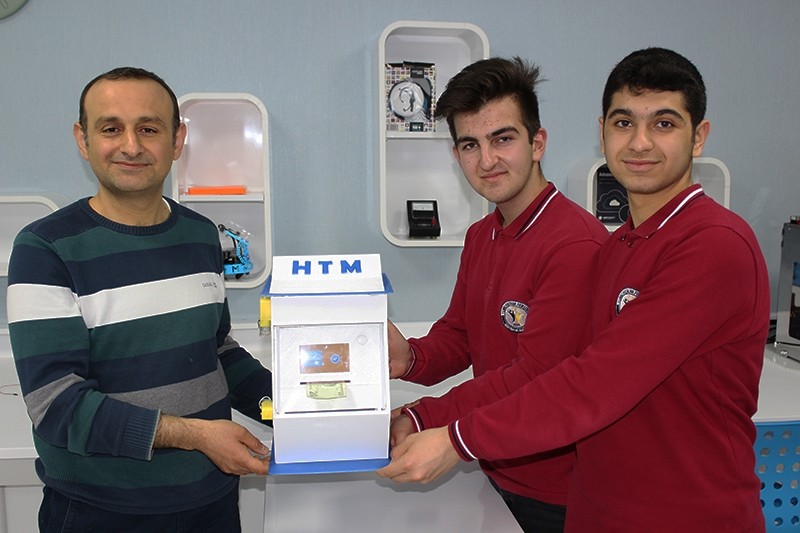 Osman Buğra Bolat and Berat Doğuhan Başara — from the northern Tokat province — led by their information technologies teacher Ahmet Arpacı, have developed a machine that can kill the bacteria on banknotes with ultraviolet light.

Speaking to Anadolu Agency (AA), Arpacı said there were thousands of bacteria on banknotes as money is probably the only thing passing from hand to hand in such an uncontrolled way.

"You can spend in the U.S. or Turkey the money you got in Africa. As we thought that money, which can carry myriad bacteria, should be cleaned, we launched a study," Arpacı said.

He said they had eventually decided that automated teller machines (ATM) would be the most suitable platforms for their project.

"During our study, we saw that the growth of the bacteria on money, when exposed to ultraviolet light, stopped. We developed a device that we named an [Hygienic Teller Machine] HTM once the technical drawings were complete. We have also applied to get a patent for it," Arpacı added.

One of the students, Bolat said everybody knew banknotes passing from hand to hand are dirty and their device may help prevent sicknesses that the bacteria on money cause.

The HTM works in the same way as an ATM. Banknotes thought to be dirty are inserted into this device and it gives the banknotes back completed disinfected by ultraviolet light.