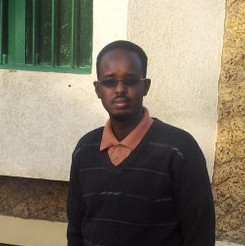 Abdirahman Ahmed Hasan, an Ethiopian citizen who studied in Turkey with "Türkiye Scholarships", has become the Minister of Trade, Industry and Transportation in Ethiopia's Somali Regional State.

Hasan carries out the executing role in the economy of the second biggest state of the country, where each state has its own council under the federal administration system.

Receiving higher education at Ankara University and completing his graduate studies in the department of business management at Anadolu University in 2015, Hasan is just one of the thousands of young people who have furthered their education with the support of the Presidency for Turks Abroad and Related Communities (YTB) and played a role in the growth of Africa.

Stating that he applied to Türkiye Scholarships on his friends' advice, Hasan told Anadolu Agency that he did not know much about Turkey before coming here, and loved Turkey after spending time in the country.

"I loved Turkish people because they were sincere and warm," said Hasan, stating that he had the opportunity to contact many civil society representatives as well as YTB officials during his time in Turkey.

Hasan, stating that he is in regular contact with his friends from Turkey, said: "We have become like a family."

Saying that he has visited many cities in Turkey such as Istanbul, Konya, Ankara and Eskişehir Hasan said: "I have also been to European countries but Turkey is something else."

Remarking that he still reads Turkish newspapers to follow the news in Turkey despite being back in his home country, Hasan commented that Turkey's policies toward Africa are moving in the right direction.

Stating that Turkey is the second most prominent country after China in Africa, Hasan said Turkish investors should increase their operations in Ethiopia, especially in the region of Somali, especially as Turkish products are more in demand than their Chinese counterparts because of their high quality.

Hasan stated that he will give special attention to improving bilateral trade relations between the two countries during his tenure.

After becoming a member of the Alumni Association of Turkey, which is headquartered in Addis Ababa, Hasan said there were many young people studying in Turkey who have great potential for the future.

In Ethiopia, Dini Remedan, the Minister of Culture in the state of Harar, and Nureddin Muhammed, the Vice Minister of Health in the Somali Region are among the alumni of Türkiye Scholarships.

With the implementation of Türkiye Scholarships in 2012, which received around 4000 applications in its first year, a rapid increase was witnessed in the application numbers throughout the years, to reach around 130 thousand applications in 2018.

Türkiye Scholarships is a scholarship program which not only provides financial support but also ensures university placement for students in their intended program of application. With this feature, it differs from other scholarship programs in the world. Apart from university education, it is aimed to provide students with the benefits of social, cultural and academic extra- curricular programs and activities while they are in Turkey.

Close communication with international students is sustained not only during their education but also after their graduation. Students who have completed their higher education in Turkey become voluntarily country ambassadors who build bridges of friendship between Turkey and their countries.