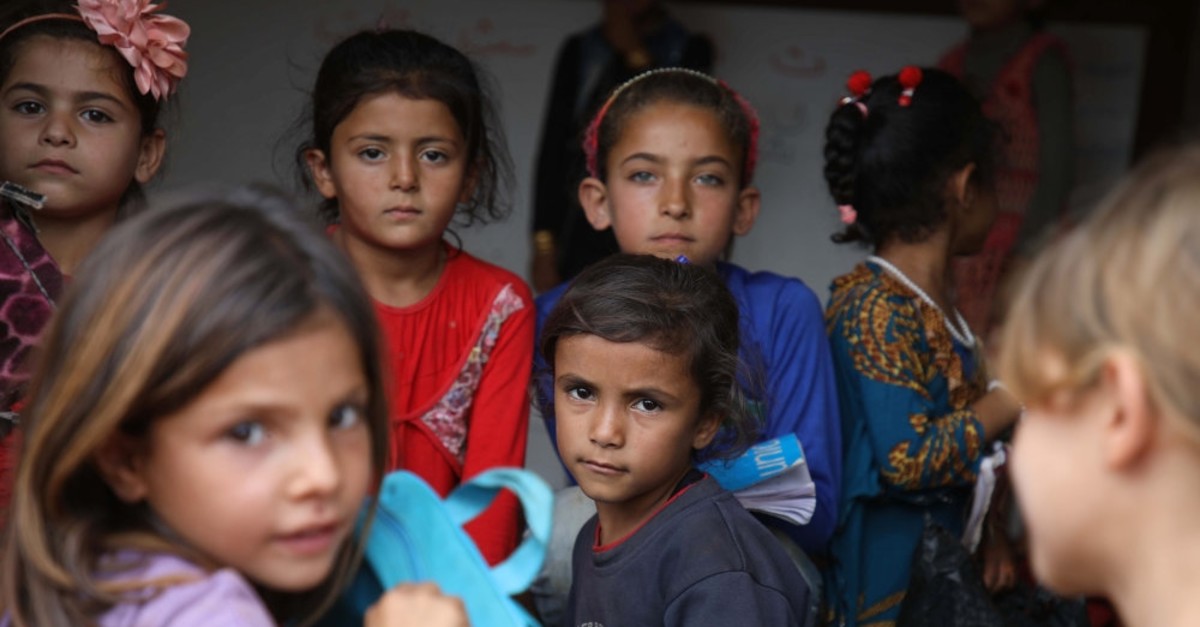 Children hold steadfast to the hope of a brighter future in the Shuhada Miskan school.
by Daily Sabah with AA Apr 17, 2019 12:09 am

Syrian children hold on to education in hopes of a better future, despite living in a war-torn country

As the conflict in Syria enters its ninth year, a generation born and raised in an environment of conflict continues to hold on to education despite tough conditions. While conflict, displacement and violence have become a part of daily life in Syria, children hold steadfast to the hope of a brighter future in the Shuhada Miskan school located in the Yazi Bagh refugee camp in Syria's northwestern Azaz region. Speaking to Anadolu Agency (AA), Iman Mustafa Zaydan, a class teacher at the school, which has around 350 students up to sixth grade taught in containers and tents, said her students enjoy education despite all odds.

Speaking to Anadolu Agency (AA), Iman Mustafa Zaydan, a class teacher at the school, which has around 350 students up to sixth grade in containers and tents, said her students enjoy education despite all odds. "While it becomes very hot and dusty in the summer, it is cold and muddy in winter. There is no infrastructure at the school, and students are forced to walk through mud to reach their classes. They have no space to play here," she said.

Turkey began providing humanitarian, political and military backing to Syria's moderate opposition soon after anti-regime protests began in 2011, and it has remained a steady ally ever since. But its influence became more explicit in 2016, when Turkish troops and the Free Syrian Army (FSA) launched Operation Euphrates Shield against Daesh terrorists along its borders in northern Syria.

Following the successful operation against Daesh, the northern Syrian towns of Jarablus, al-Rai, al-Bab, Dabiq and Azaz were cleared from Daesh. In January 2018, Turkey also launched Operation Olive Branch against the PKK terrorist group's Syrian affiliate, the People's Protection Units (YPG), in northeastern Afrin province to clear the region of the group.

Syria's north, especially towns near the Turkish border, are largely safer, following the two Turkey-backed operations. Millions fleeing attacks from Bashar Assad's forces went north in search of a safe haven. They are either forced to live in tents or in decrepit buildings, and most are dependent on aid for a living. Constant displacement in the country leads to irregularities in children's lives, which especially affects their access to education.

Nine-year-old girl Maryam, one of Zaydan's students, said that she loves to spend time at the school. "Even though the school is very muddy, I really enjoy coming to school and I love my teachers. I am spending a great time at school," she added. In the class of 27 students, Maryam said that her teacher is her idol. "I want to become a teacher as well when I grow up," she said with a smile on her face.

Schools have been renovated and a hospital is also being built in Azaz. Turkey also helps locals build olive oil facilities in Azaz, where agriculture is the main source of income for residents. Turkey has also opened post offices in the region, which are provided by the General Directorate of the Post and Telegraph Organization (PTT). Thanks to these efforts, so far, more than 260,000 Syrians living in Turkey have returned to their liberated hometowns.

Speaking about other obstacles children are facing, Zaydan said the students are not able to continue their education outside the classroom. "The reason for that is they have no personal space at the camps they are living in," she said. "While the families try to provide and improve the basic living conditions, children are left on their own in receiving their education," the teacher added.

Zaydan said at times children are also short of school materials such as books, pens, bags or any necessary means to actively participate in the class. Another problem is the age gap between the students in different classes, the teacher said, giving an example of her class where she teaches students 8 to 12 years old in second grade. "This shows that many of these children did not receive education for a long time, or any at all before they arrived at the camp," she added. Zaydan said that her students are full of hope when it comes to their future dreams. "Some of these students are very smart, but they do not have the necessary support needed to ensure a better education and brighter future to them," she added.

Fatima, an 8-year-old student, said she moved with her family five years ago to the refugee camp from Jukhah region, which is located southeast of Aleppo. "I love my school very much," Fatima said, adding she enjoys her studies. "I want to be an English teacher when I grow up. I have learned the letters and numbers already," she said. "The reason why I love English is my teacher Ahmed. All the things I have learned was taught by him. I don't know where he is right now. I did not see him again," she added.

Speaking to AA, Ramadan Abdallah Taame, who spent 40 years of his life as a teacher, said children have remained "far away from education" since the start of the war.

"We are trying to teach as many children as possible because these children are our future, but they continue their education under harsh conditions. Their families cannot do much for them, but they are still continuing their education with very limited resources," he said.

Taame said that there is no good communication between the families of the children and the school administration.

"In order to find work to earn bread and butter to survive, the parents often neglect the education of their children," he said.

"Women are experiencing the most difficulties in the camp trying to keep their children warm, clean and providing them with food to prevent them falling ill," he said, adding these women do not find time to pay attention to the education of their children.

"The burden of the parents who live under harsh conditions in the camps affects the future of their children," Taame added.