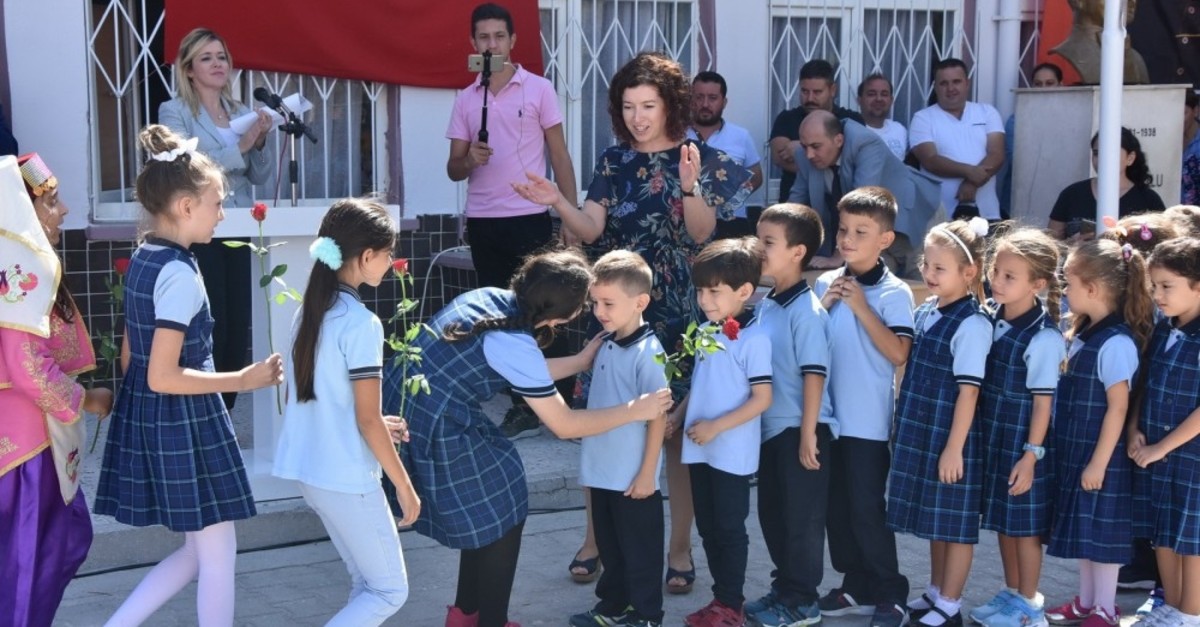 Fourth graders welcome first graders to the school, giving them flowers, on the first day of the school year at a school in Manisa's Akhisar district, Sept. 9, 2019.
by Daily Sabah Sep 10, 2019 12:17 am

School bells rang for over 18 million students and a million teachers in Turkey at the start of a new academic year Monday. This year will see longer recesses between classes and multiple midterm breaks as well as a shortened three-month summer break. Students will enjoy the first break between Nov. 18-22, 2019 and the midterm break will be between Jan. 20-31, 2020. Coupled with weekend holidays, students will have nine days of breaks overall.

The first semester of the 2019-2020 academic year will end on Jan. 17, 2020 and the second semester is scheduled to begin on Feb. 3 and end on June 19. The students will take a break between April 6 and 10 in the second half. In May 2019, Turkey shortened the 13-week summer break for schools to 11 weeks in a move to increase efficiency in education.

According to National Education Minister Ziya Selçuk, Turkey was among the countries with the longest summer break, which increases the possibility of students forgetting what they have learned. Selçuk had also said each break would have a theme in areas of science, culture, art, and sports, giving children a chance for social activities.

Another change to school breaks is for recesses between classes. Students will now have five more minutes in each recess, 15 minutes in total, while class times will remain 40 minutes. Teachers will also encourage students to be involved in social activities in the long recesses.

The country also increased the mandatory age required for first-graders, from 66 months to 69 months, although parents will be allowed to apply for children of 65 months if the child's development is suitable to start school.

In another change, schools will host design and skills workshops this year for a skill-focused education and improve the knowledge they learned in classes by putting them in action in workshops, especially in sciences.

One of the most important changes is for students of vocational schools. Starting this year, students attending "vocational education centers" or informal schools to train students for skill-specific jobs will be recognized as high school graduates once they complete their training. This change allows students of distance learning programs to receive a high school diploma while attending these centers.

The new school year also brings a healthier change to school food. Under the new regulations, foods that do not carry the "school food" logo will be banned from sale at schools and only foods with suitable levels of calories, fat, sugar and salt for school-age children will be allowed.

President Recep Tayyip Erdoğan was at a high school in Istanbul's Kadıköy district yesterday for a mass opening ceremony of 716 newly built schools across Turkey and to speak about the new school year.

Erdoğan said the government was committed to the most comprehensive transformation of education and that they "almost built an education infrastructure from scratch." He noted that they always earmarked the lion's share to education in the state budget. "The education budget was TL 7.5 billion when I took office as prime minister, and it is now TL 114 billion," Erdoğan said.

He listed several changes to education, particularly ending crowding in classrooms. "With 309,000 new classrooms, crowded classes are a thing of the past. I was a student in a classroom of 75, and there were classrooms with more than 100 students in my time. Now, I just asked a student here how many students are there in her classroom, and she told me that they were only 30 students. This is the average number today in Turkey," he said. Erdoğan also hailed increasing the school age with 12 years of mandatory education instead of eight years of schooling as well as free textbooks as major education reforms.

The president said education was viewed in the past as a tool to put people "in one mold," "to raise people with a single mindset" and their view of education aimed to end it. He said they introduced new elective courses in middle schools to address students' skills, development and choices.

"We have one important task ahead, however. We have to work harder on issues like raising quality in education, matters that need labor and time," Erdoğan said. He lamented the lack of an education system peculiar to Turkey and copying a system from the West like Turkey did in administration, laws and bureaucracy.

"In the end, we could not convey our own ancient values nor Western culture to our students fairly. Ultimately, lost generations unaware of their own values, in denial of their ancestors and doing nothing but expressing admiration for Western culture came out of our education system," Erdoğan said.

School can be a scary experience for first graders, especially if they have "helicopter parents." Called such for "hovering over" their children in every aspect of their lives, they can be a challenge for children trying to adapt to school.

Associate professor Aslı Bugay Sökmez of Middle East Technical University told Anadolu Agency (AA) that "overparenting" is criticized for the damage it does to children.

"Helicopter parents cannot separate from their children and focus on them too much, even doing the tasks the children should be responsible for. They are overprotective and controlling. They also try to be in control of school, teachers and other parents. For instance, they can be manipulative people trying to control the behavior of other children, parents and teachers in correspondence in WhatsApp groups schools set up for better communication between parents and teachers," she said.

Sökmez noted those parents themselves are under stress as their children when the children start school, and this stress can be "infectious" for children. "Adaptation problems can manifest in children with helicopter parents, and this may surface physically. I suggest psychiatric consultation for such children with constant crying, stomach pains, headache and sleeplessness lasting more than three weeks," she says.

Sökmez points out that children with helicopter parents cannot develop social skills, take on responsibilities and are psychologically weak. "Those parents are not aware that they hurt their children's psycho-social development by setting up communication in places where the children should communicate themselves. For instance, they plan everything in a child's life, from birthday parties to which gifts they should buy for their friends and which friends they should have. Those overprotective and controlling behaviors can limit a child's contact with school, friends and teachers and keep those contacts very 'structured' instead of something natural. It stunts their ability to develop genuine feelings and have a personality. Moreover, such children feel themselves humiliated or rejected even in the slightest case of an obstacle or negative situation," she warns.