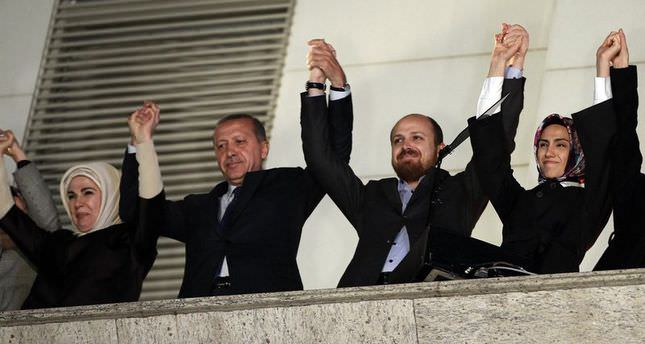 ISTANBUL — The nation affirmed its confidence in the AK Party, despite the black propaganda and operations carried out by the Gülen Movement with the aim of overthrowing the ruling government.

Since the AK Party first came to power, Erdoğan's political charisma and the nation's trust in the party increased stably across the country.
Without exception, Erdoğan has won every election his party competed in.

In what has become an election tradition for the past 12 years, Erdoğan addressed a huge crowd in front of the AK Party headquarters and thanked his supporters. "You have protected the independence struggle of the new Turkey," the prime minister said. "Today, no one has lost, every citizen has won a party that will serve them," Erdoğan continued, adding: "Let's open a new page in which the love of Turkey exceeds all. "Seventy-seven million [Turkish citizens] should know that new Turkey has won today. National unity, brotherhood and the reconciliation process has won today," he shouted to great applause.

Slamming the Gülen Movement and its continuous attempts to mislead the nation, the prime minister threatened that those who try to change the course of Turkey through illegal messages and acts will be razed to the ground. Referring to the rift between the well-established Gülen Movement and the government, Erdoğan stated that the election process made clear who the traitors were.
He said he filed a complaint about some members of the movement and pointed out that while some Gülenists fled in the past, others may soon flee as well.

Erdoğan denounced the head of the movement, Fethullah Gülen, who has lived in self-imposed exile in Pennsylvania for 14 years and warned his foes that he "will enter their caves."

He went on to say: "How could you dare threaten our national security?

They [the Gülen Movement] will pay the price. They have infiltrated governmental bodies for 35 years. Now it is time to purge them."
Erdoğan was interrupted midspeech by chants of "Stand tall, do not bow, Turkey is with you" and "God is great." Erdoğan responded with "We are here. The nation will not bow, Turkey will not be defeated."

Calling out the opposition party, Erdoğan contended that it is not enough for a party to embrace the people; opposition parties should also leave arrogance out of politics. The prime minister said it was clear that Turkey is in need of a new opposition and he called on opposition parties to learn a lesson from the election results.
Last Update: Apr 02, 2014 3:09 am