Supreme Board of Election responds to recount 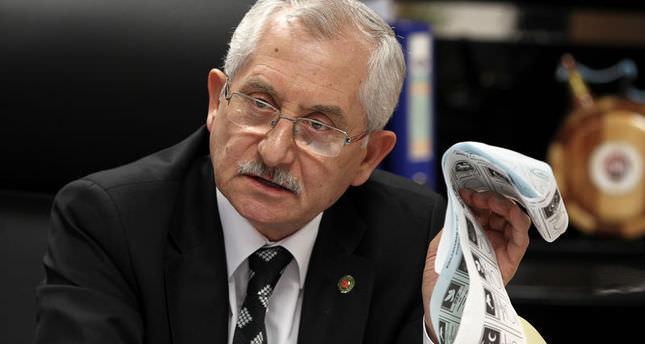 by daily sabah
Apr 01, 2014 12:00 am
ISTANBUL — Political parties' objections to the results of Sunday's local elections are catalogued and assessed at the Supreme Election Board (YSK). The head of YSK, Sadi Güven, assured all parties yesterday, noting that all objections would be assessed in a timely manner. Dozens of mayoral candidates from all around the country have lodged objections at the Ankara-based YSK.

Statements have been made by a number of political parties objecting to the results of the March 30 local elections. Sadi Güven, president of the Supreme Board of Elections (YSK), expressed that the objections were legal and he called on political parties and citizens to remain calm. "I served as a judge for 30 years and never once in my life saw a person who gained what they claimed through violent means if they were not legally entitled to it," said Güven.

In Ankara, Mansur Yavaş from the Republican People's Party (CHP) claimed his party won in the capital but the votes were not counted properly. He stated that Melih Gökçek from the AK Party had interfered in the results. In the Susuz district of Kars province, AK Party candidate Murat Uray disputed the results and called for a recount of the votes. His objection was accepted by the Susuz Elections Judge who said the new results would be announced in a few days. In Bartın, the CHP objected to the results and the district's local assembly and officials are currently doing a recount. In the Kartal district of Istanbul, AK Party officials claimed that 9,000 votes belonging to the party were illegally deemed "void." They called for a recount. In other places throughout the country, including Bitlis, İzmir, Osmaniye, Kastamonu, Balıkesir and Afyonkarahisar, requests were made for votes to be recounted.

Responding to journalists' questions at the YSK, Güven stated that there is currently a difficult process underway in response to disputes of the final results of the elections. Noting that parties are legally entitled to dispute election results, Güven stated that it was a natural process and he didn't think it would pose a problem for the local election boards. "The local election boards will make a decision and provincial election boards will make the final decisions based on the objections. We need to wait for the duration and this is a legal process requiring the patience and tolerance of our citizens and political parties," Güven said, and encouraged everyone who has a claim to seek their rights through peaceful and legal procedures in the framework of the law and put their trust in the local election boards. Expressing his desire for an immediate resolution to the issue, Güven emphasized that five out of the seven people who observed the ballot boxes during the elections came from political parties. In response to the allegations claiming there were inconsistencies between the figures found in official reports with wet signatures and the ones published by the YSK, Güven stated that more than 90 percent of the election results have been shared with political parties and also published online on the body's official website.

Asserting that documents with wet signatures were the "guarantee" of the elections, Güven noted that if there were any errors, they would be addressed by local election boards and would be published online. He reassured that people's concerns would be addressed and called on everyone to remain calm.