Gökçek officially mayor of Ankara for the 5th time 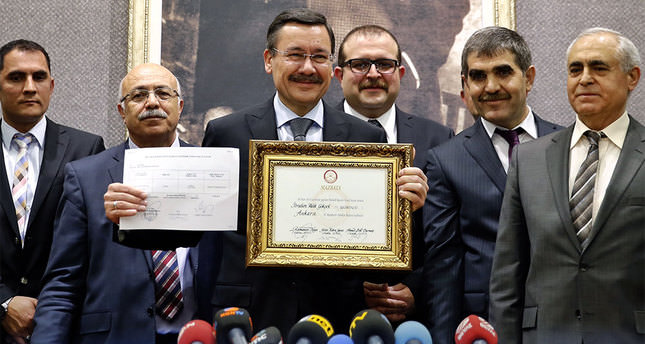 by AA Apr 06, 2014 12:00 am
ANKARA — Ruling AK Party's incumbent Ankara mayor Melih Gökçek has officially been declared as the new mayor of Ankara for the fifth consecutive time on Saturday, almost one week after the election on March 30th.

However, despite Gökçek's official declaration, CHP objected and the party is preparing to raise a last appeal to the Supreme Election Committee (YSK) for a recount of votes.

The mayor Gökçek said his party won 20 of the 25 municipalities and named the result as a "triumph" during a speech over his victory in an official ceremony in Ankara.

"According to the numbers given by the provincial election board, I received 1 million 417,183 thousand votes, and 1 million 385,916 thousand voted for Mansur Yavaş," said Gökçek, adding that he has become the major with the difference of around 32,000 votes. As of 31 of March, when 99 percent of the count was complete, the AK party lead with 44.74 percent of the votes with the CHP following closely with 43.81 percent.

Gökçek said that the AK party's number of district municipalities raised to 21 and they acquired an 80 percent success level in the elections.Gökçek declared that "five terms would be enough" in response to a question on whether he would stand again to be a candidate for mayor.

Zeki Alçın, CHP's chairman for Ankara, said "We want a recount, this is what our all opposition is about. We hope that the YSK will respond positively to our appeal."