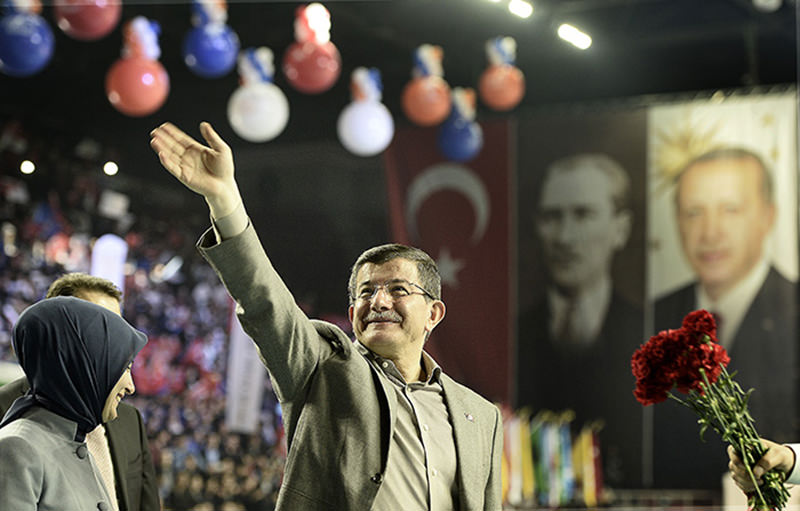 | AA Photo
by Merve Aydoğan Apr 14, 2015 12:00 am
As Turkey readies for the June 7 general elections, the ruling Justice and Development Party (AK Party) Chairman and Prime Minister Ahmet Davutoğlu introduced the party candidates at an event in Ankara on Wednesday. The latest election poll, which was coducted by the prominent polling company GENAR, shows that the public support for the AK Party is at 47 percent, while the main opposition Republican People's Party (CHP) gets 24 percent and pro-Kurdish Peoples' Democratic Party (HDP) is unable to pass 10 percent threshold with 9 percent support.

Prime Minister Davutoğlu has finalized the party's work for the 2015 General Elections Deputy Candidates Introduction Meeting, which will be held on Wednesday evening. With less than two months to go to the June general elections, Davutoğlu has devoted efforts to finalizing the party's election manifesto at AK Party headquarters in Ankara on Tuesday. Thousands of political figures, prominent business people and celebrities are expected to attend the AK Party deputy candidate introduction event.

The election manifesto that Davutoğlu said he personally prepared focuses solely on switching from the current parliamentary system to a presidential government. To draw attention to the need of switching the system of government, the AK Party will attempt to explain in detail in the manifesto how the "military coup era constitution and parliamentary system paved the way for tutelage in the country, and how it blocks state mechanisms from shifting the country to better levels." The AK Party's election manifesto aims to eliminate concerns that the possible change from the current parliamentary system to a presidential system would bolster a one-man rule, and describes the checks and balances while emphasizing the decentralization of power. As Turkey awaits the details of the proposed presidential system, sources report that the AK Party proposal is expected to stress the importance of pluralism in terms of political representation, and will argue that a presidential system would encourage pluralism by eliminating the election threshold. In addition, the proposal is expected to argue that the current parliamentary system was tainted due to consecutive coups and has become a complicated system, making change inevitable.

An establishment of a new constitution is also the main focus of the election manifesto, according to the sources. "Through a new constitution, we will introduce a new understanding of governance based on productive power sharing and a separation of powers. We will introduce a presidential system with the right perspective," Davutoğlu said on March 31. The current constitution was drafted in 1982 after the 1980 military coup. Despite numerous revisions over the last 30 years, according to constitutional experts, it still bears the stamp of military tutelage. In this regard, a new constitution is expected to include the reconciliation and democratization processes. The required modifications to the constitution in order for the reconciliation process to be finalized successfully are also reported to be included within the election manifesto. Additionally, the AK Party aims to continue its reforms for Turkey's democratization process.

While the candidate profiles for all political parties share certain similarities in some fields, they are widely varied in other areas. Davutoğlu underlined late last week that the AK Party has chosen its deputy candidates based on their qualifications and social and ethical performances, not for their popularity or fame. The AK Party's candidates include a number of notable figures such as a prominent Armenian-Turkish columnist, a headscarf-wearing victim of the February 28, 1997 postmodern coup and a grandson of Sheikh Said, the leader of a Kurdish revolt that took place in the early years of the modern Republic. Additionally, the candidate lists from the four major political parties – the AK Party, the Republican People's Party (CHP), the Nationalist Movement Party (MHP) and the Peoples' Democratic Party (HDP) – show an increase in the number of female candidates compared to previous elections. Out of the 550 deputy candidates on the AK Party's deputy candidate list, 112 are lawyers, 66 are engineers, 32 are doctors and 36 are academics. The list also includes 17 journalists and 110 others from the private sector.

Davutoğlu announced that the first election rally will be held on April 25 in the symbolically significant provinces of Erzurum and Sivas. The significance of Erzurum lies in the fact that the Erzurum Congress, an assembly of Turkish revolutionaries, played a fundamental role in shaping the national identity of modern Turkey. Along with the Erzurum Congress of 1919, the Sivas Congress was an assembly of the Turkish National Movement, where vital decisions were made that fundamentally shaped the future policy in the frame of the Turkish War of Independence. Afterward, Davutoğlu will be travelling to the southeastern province of Hakkari on April 27 to the opening ceremony of a newly established airport.