MHP promises to end reconciliation process in its election manifesto 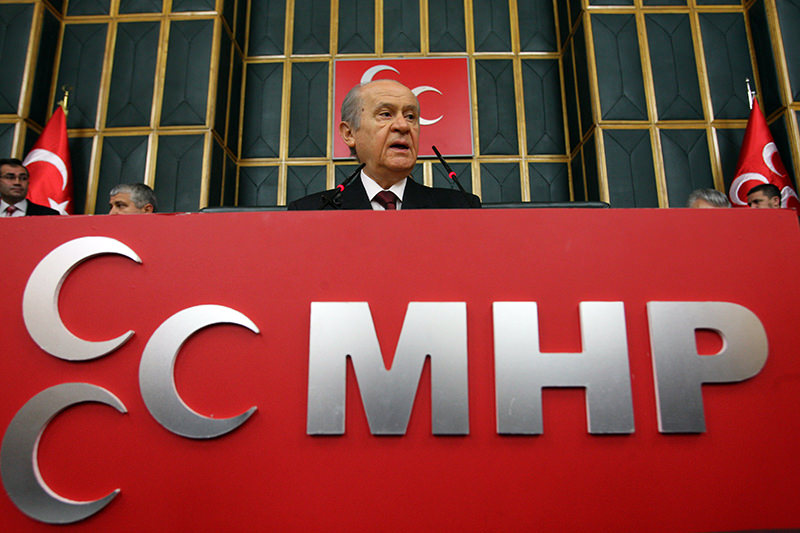 by Merve Aydoğan Apr 21, 2015 12:00 am
As Turkey's political parties continue to announce their election manifestos, the Nationalist Movement Party (MHP) Chairman Devlet Bahçeli is expected to declare his party's manifesto on May 3. Although the MHP has not officially announced its election manifesto, local media sources have reported that ending the reconciliation process tops the party's agenda.

In the MHP's electoral manifesto, the ruling Justice and Development Party (AK Party) has been reportedly criticized for holding peace talks with imprisoned PKK leader Abdullah Öcalan in efforts to successfully finalize the reconciliation process, and the MHP promises to put an end to the peace talks and "to not negotiate, but combat terror." In the reconciliation process, which was initiated by the AK Party government, a large number of PKK members have turned themselves in to the authorities in the region. The process has also put an end to violence through a series of democratic reforms and economic investments to boost stability in the region.

The MHP election manifesto, which is still awaiting Bahçeli's approved, reportedly has four major points – economic and social policies; corruption, security and combating terrorism and foreign policy. It also reportedly emphasizes what has previously been mentioned by the government of the necessity of establishing a new constitution. The MHP manifesto reportedly states: "A new constitution that secures basic rights and freedoms of citizens" needs to be created, and continues by promising to prevent the recognition of any other language other than Turkish, such as Kurdish, in an aim to protect Turkey's unity.

The section on foreign policy has been prepared in sole reference to Turkey and Turkic nations. As government officials have kept a solid stance on the Cyprus issue, and during his official visit to Turkish Cyprus in late September 2014 as foreign minister, Prime Minister Ahmet Davutoğlu urged both the north and south of the island to come to the table for negotiations over reunifying the island, the MHP promises to predicate an opposite policy. The MHP underlines a Cyprus policy of a "two regions, two nations-and-two-governments-based policy [that] will be established under the Cyprus policy of Turkey."