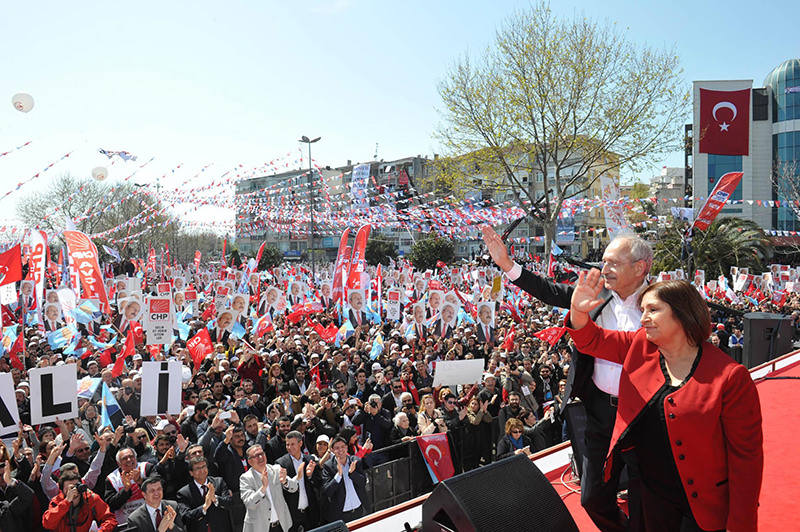 | DHA Photo
by Daily Sabah May 03, 2015 12:00 am
According to the main opposition Republican People's Party's (CHP) schedule of meetings, the leader of the party, Kemal Kılıçdaroğlu, will not hold rallies in Şırnak, Hakkari, Van, Bingöl, Mardin, Ağrı, Batman and Bingöl, eastern provinces where the Peoples' Democratic Party (HDP) is likely to get the majority of votes in the June elections. The CHP, whose target is apparently the western provinces during its election campaign where they are likely to receive many votes, purportedly discarded the east and is set to hold rallies in just 10 provinces in eastern and southeastern Turkey, out of 58 meetings planned.

The CHP's focus will be the three major metropolitan cities of Istanbul, Ankara and İzmir. Kılıçdaroğlu will address the people of Istanbul on May 9, May 24 and May 31 and on May 17 in Ankara, and he is scheduled to hold rallies in İzmir where the CHP draws most of its support on May 5 and May 30. Kılıçdaroğlu will finalize his program of rallies with those held in Eskişehir and Ankara on June 6.

The meetings Kılıçdaroğlu held started roughly two weeks ago. The CHP has come to the forefront thanks to the populist election promises he has made as the elections draw near. Leaning on economic issues, Kılıçdaroğlu seemingly aims to receive votes via addressing economic concerns. The CHP's promises vary from a significant increase in the minimum wage, reducing diesel prices to TL 1.5 ($0.60) as well as a poverty wage program for poor families, a family insurance project that aims to pay a certain amount to families with insufficient income.

Kılıçdaroğlu said during his rally in Edirne last week: "If the CHP comes to power in the upcoming elections, I'll cut government taxes on diesel fuel to zero for farmers. We [CHP] will bring family insurance to each household; every family will have over TL 720 income per month."

However, after he brought up the matter and made the pledges, he was criticized for exaggerating promises, with many economists explaining the hardships of actually turning the policies into practice and saying that Kılıçdaroğlu is not capable of making the correct calculations. Despite a lack of belief that the CHP can stick to its promises once elected, Kılıçdaroğlu has stood by his promises and has not taken a step back, trying in vain to convince critics that his calculations are well founded.

Finance Minister Mehmet Şimşek, speaking after the CHP announced its election manifesto, said that if the CHP could provide just one-third of the financial resources necessary to realize its economic election promises, he will vote for the party.

Şimşek said that the additional cost of increasing the minimum pension to TL 1,500 would amount to TL 37.5 billion, pointing out that this figure would double Turkey's current account deficit.

He said that the CHP "deserves a Nobel Prize" if it can explain how it will achieve these targets without exacerbating the current account deficit and dragging Turkey into a crisis. "We will neither deceive nor be deceived. We will not fall into the trap of populism," he added.