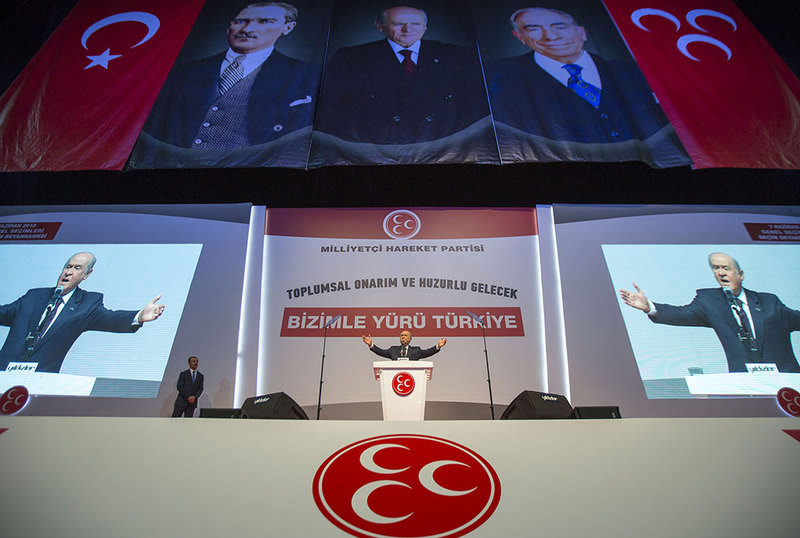 Coinciding with May 3 ‘Turkism Day’ celebrated by nationalists, objection to Turkey’s reconciliation process announced within MHP’s election manifesto was no surprise; however, the party is trying to increase the impetus of its campaign through wide economic promises, while encountering promises by other opposition parties

Under its main election slogan "Walk with us Turkey", the Nationalist Movement Party (MHP) announced its election manifesto almost a month before the June 7 parliamentary elections through a meeting held in Ankara Arena Sports Complex on Sunday.

The MHP, the third largest party in terms of votes in 2011's general elections, was the last major party to announce its election manifesto. As expected, the MHP's main election promise is using all means to end the terror without dialogue or mutual steps, and the party promises to end Turkey's ongoing reconciliation process. However, the party also put forward a comprehensive economic promises package along with its high profile candidates such as former Central Bank Governor Durmuş Yılmaz.

Starting on May 6, the MHP will speed up its election campaign with meetings around 60 provinces, while the party will reportedly spend 40 million Turkish liras ($14.8 million) for its campaign.

MHP's meeting was deliberately chosen to coincide with the 71st anniversary of the single-party era protest held by nationalists against the persecution of nationalist figures on May 3, 1944. Twenty-three nationalist leaders and intellectuals, including Alparslan Türkeş who later founded the MHP, were tried with the accusation of racism and Turanism, the political movement to unite all Turkic peoples under a state. The trial was also an output of the Allies' reaction against Turkey's neutrality in World War II and took place when Nazi Germany's power started declining. Ten were sentenced to jail up to ten years, however, the decision was overruled and they were released in October, 1945. Since then, nationalist circles celebrate May 3 as Turkism Day.

Speaking on Turkey's current system debate, Bahçeli denounced the presidential system put forward by AK Party and stated that June 7 elections will bring an end to this debate. The MHP's manifesto states that parliamentary system based on Turkey's unitary state structure is the most suitable way of governance for the Turkish people.

The MHP promises to decrease diesel price used in agriculture to TL 1.75 ($0.65), slightly higher than the CHP's TL 1.5 promise. Currently, diesel is being subsidized by TL 3.3 to 4.75 per decare, along with many other agricultural subsidy items.

MHP promises to increase employment by 4.5 million people to 29.1 million, which currently stands at 25.4 million as of January 2015 data. Subcontracted government employees will be hired permanently, the manifesto says, while promising 700,000 additional jobs per year.

Cemevis, houses of worship for Turkey's Alevi community, will be granted legal status and will benefit from government aid, the manifesto says.

The party aims to double both the economic growth and GDP per capita by reaching an average 6.6 percent growth rate per year and $20,000 per person. The manifesto says that taxes applied to employment will be reduced; regular tax payers will be awarded.

Public lands will be allocated to poor citizens, the manifesto states, and the MHP's earlier project of "Hilal Kart", a social aid card to be given to families, is also included within the manifesto.

The party also promises to increase disability pensions to TL 400 and pensions paid for people who are 65 and over to TL 350. Each successful student will be provided with a TL 10,000 interest-free loan to be collected after employment.