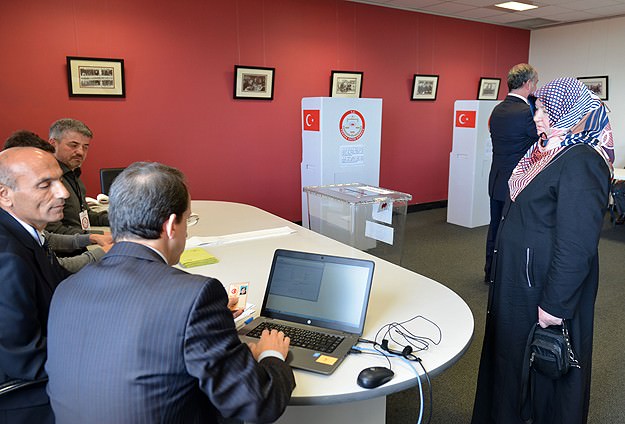 by Anadolu Agency May 08, 2015 12:00 am
Turkish citizens living abroad went to the polling stations on Friday to become the first to cast their ballots ahead of Turkey's general election on June 7.

After arriving at the ballot in the morning, she told Anadolu Agency, "May the election be beneficial and lucky for our country and state."

Forty years have passed since Elif Karakaya moved to Belgium but on Friday she was one of the first Turkish nationals in Brussels to cast her vote in Turkey's general election.

Turks living abroad are able to cast their ballot four weeks before the June 7 election at consulates and embassies around Australia and Europe.

"I want to fulfill my duty as a Turkish citizen," Karakaya told Anadolu Agency on Friday. "God willing, Turkey will continue with its success."

Voting booths were opened at 11 a.m. local time (1000GMT) for Turkish nationals in Germany, France, Belgium, Austria, Switzerland and Denmark. Turks in Australia were the first to vote due to the time difference.

Ex-pat Turks were first allowed to vote from abroad in last August's presidential election. Previously they had to travel to Turkish border gates to cast their ballot.

"Having to go to Turkey by plane and cast our votes at customs was agonizing," Haruk Akbulut, who has lived in Belgium for 20 years, said.

Coşkun Akgül, 35, told Anadolu Agency in Berlin that he was happy to be able to vote from Germany, where around 1.4 million Turks are authorized to vote.

"I think that it's important that we use our votes for our country's future and for a healthy functioning democracy," Akgül said.
In Paris, hundreds formed a queue in front of the Turkish consulate.

"We just came here to practice our democratic right," Mehmet, a 48-year-old voter, said. "If there is democracy in Turkey, we hope that our votes will be delivered safely."

A 22-year-old student who gave her name as Ayşe, told Anadolu Agency: "Voting here gives us a sense of belonging. We are here to express our political will. Even if we live abroad, we still can participate in shaping politics in our country."

Voting for Turkish general elections has also begun in 33 customs offices on Friday.

A total of 33 Turkish air- and seaport customs offices opened polling for Turks who reside abroad but find themselves in Turkey during the elections. They will remain open until June 7 - the day the country goes to the polls to choose their lawmakers.

However, Turkish voters living in Germany, Australia, Austria, Belgium, Denmark, France, Switzerland and the Turkish Republic of Northern Cyprus can also vote as of Friday until May 31.

Voters have to bring their national ID card, passport or a document, which shows an ID number, in order to be eligible to cast a ballot.

Turkey's Supreme Election Board had announced earlier that 112 polling stations would be opened in 54 countries to serve the almost 3 million Turkish nationals living abroad.

Elections in Turkey have the second highest voter turnout among developed democracies, according to a report released by the Washington D.C.-based Pew Research Center on Wednesday.

More than 84 percent of the electorate went to the polls in the 2011 general election, according to the report comparing turnout rates in Organization for Economic Co-operation and Development member states.

Although voting is mandatory in Turkey, the laws are not strictly enforced.

According to the Ministry of Foreign Affairs, more than 5 million Turks live abroad, including around 4 million in Western Europe, 300,000 in North America, 200,000 in the Middle East and 150,000 in Australia.

Those eligible are able to vote at 112 polling stations in 54 countries between Friday and May 31 while polling stations for Turkish ex-pats are open at border posts and airports until June 7.