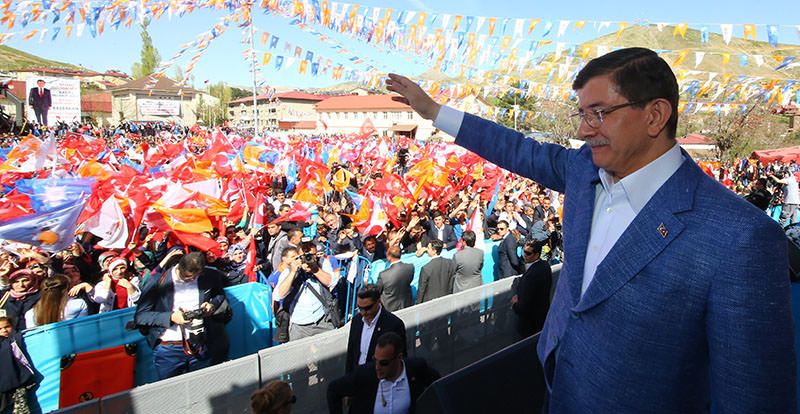 by Daily Sabah with AA May 09, 2015 12:00 am
Turkish Prime Minister Ahmet Davutoğlu has called on the leaders of Turkey's opposition parties to retire from politics in case of a defeat in the country's parliamentary elections, which is scheduled for June 7. If the AK Party fails to win enough votes to form a government, he will resign said Davutoğlu and called on opposition parties to take British opposition as an example in response to a failure in elections.

"Here I am making the call: Whoever loses the elections shall leave politics," he said at a campaign rally of his ruling Justice and Development Party (AK Party) in the southeastern province of Adıyaman on Friday.

The Turkish prime minister reiterated that he is ready to resign if the AK Party loses the elections – which he sees as "impossible."

"[If we lose], then I will quit politics the next day. How about you? Are you ready to leave your seats?" he asked, aiming at opposition leaders.

After political parties announced their candidates' lists in April, Davutoğlu said: "If I win, I will continue to hold my post under democratic conditions, but if I lose, of which there is a low chance, I will hand over my seat to the winner and write books."

Furthermore, Deputy Prime Minister Yalçın Akdoğan said Friday he predicts the ruling AK Party will take 50 percent of all votes during the country's parliamentary elections on June 7. "The AK Party now ranges in public surveys between 44 and 47 percent," he said during a live interview on private NTV channel.

Akdoğan said election campaigns and rallies held by Prime Minister Davutoglu across Turkey and stepped up efforts by members of the party's local offices will help influence voters.

"There has recently been a vigor and rush in all our local organizations, which I think will result in an upward trend [in votes]," he said. "The AK Party's success should not solely be based on being unrivaled."

The AK Party was victorious in last year's March local elections and its then leader Recep Tayyip Erdoğan claimed the presidential election in August 2014. In the 2011 general election, the AK Party received almost 50 percent of votes.

Approximately 56 million Turkish citizens are eligible to vote next month in the country's 25th general election to choose 550 lawmakers for the parliament. Candidates are representing 20 political parties.

The voting process started on Friday for Turkish citizens presently in the country, but who normally live abroad, at Turkey's 33 customs gates. Turkish expats are also able to vote at 112 polling stations in 54 countries between Friday and May 31. Turkey held general election every five years until a 2007 constitutional change, which set elections to every four years.