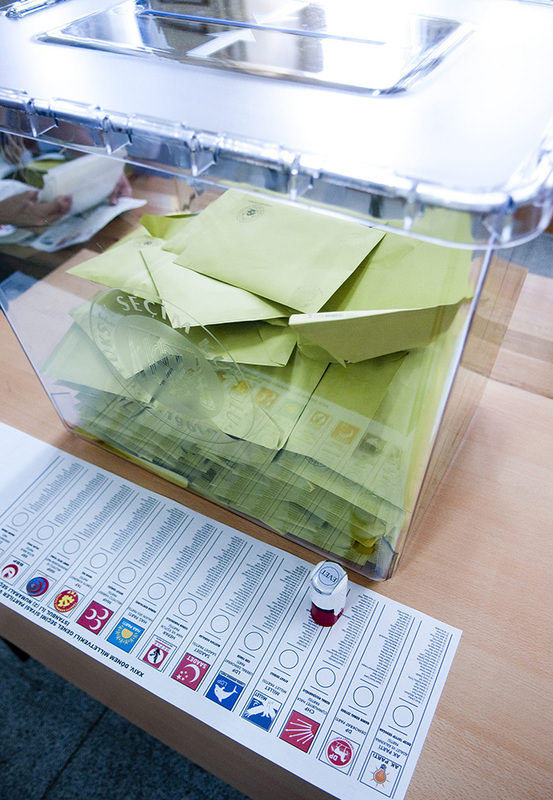 The new AK Party office will employ at least 200 people for the campaign online.

A month ago, CHP Chairman Kemal Kılıçdaroğlu ran an online public meeting at eksisozluk.com, one of Turkey's biggest internet communities with over 400,000 registered users, to answer members' questions and appeal for their votes.

Parties' renewed focus on social media is not surprising since Facebook has 32 million users and Twitter has 10 million users in Turkey.

A recent survey by the London-based social media agency We Are Social shows that Turks spend an average of three hours a day on such online platforms.

The AK Party's digital office reveals the importance of social media for the party and its desire to reach voters there.

Beşir Atalay, a former deputy prime minister and current AK Party spokesman, claimed it was the first time that a Turkish political party had opened such an office, saying it would continue to operate after the June elections.

Gökhan Yücel, the AK Party office coordinator, said their job is "to create content [for social media], track the campaign and inform the party's branches."

The office employs a diverse group of people including sociologists, marketing experts and political scientists.

The digital office also works with the party's candidates to increase their presence on social media and bring their online presence in line with "the AK Party's digital identity," Yücel said.

The CHP has also formed a separate social media unit based on voluntary participation at its headquarters in Ankara.

"Our pledges are right and many of them are about the economy. We need to deliver those to people," Candemir told Anadolu Agency.

In order to accomplish that, she, together with volunteers from the party's 39 branches in the city, organized hashtag campaigns – "#kaynakcebinde"("the money in your pocket") – to answer voters' questions on how the party would fund its economic pledges.

Candemir claimed the campaign was a successful one and had become a trending Twitter topic for Istanbul. The party also answers questions raised by social media users.

However, the CHP tries to avoid the kind of protracted conflict which can characterize online debates: "We ignore troll accounts," Candemir says.

She also aims to overcome purported perceptions that the CHP is an elitist party and out of touch with ordinary people.

To dispel this, the online office shares photographs showing the party's door-to-door campaign and candidates reaching out to the electorate.

For the HDP, the issue is building a presence which does not rely on traditional mass media or expensive advertising.

Zinar Karavil, who is responsible for the HDP's social campaigns, said he wants to reach out to people that the party is unable to contact through conventional media.

Building links to marginalized groups is in fact in line with the party's overall election message "Biz'ler Meclise," (which roughly means "We to Parliament" in English), aiming to target underrepresented or unrepresented voters in Turkish politics.

The HDP also relies on volunteers in its social media campaign in part because the party was not eligible to receive financial help from the Turkish Treasury.

Running on a limited budget "the party could not allocate any funds to social media campaigns," Karavil tells Anadolu Agency.

In Turkey, a political party in parliament is entitled to money in proportion to its general election result. Since this is the HDP's first general election campaign, it has had to make do without state funding.

Awareness of the potential for social media to win campaigns has undoubtedly increased after Barack Obama's rise to the White House. Nevertheless, the content of the message, as well as the method of its delivery is important, says the man who was at the heart of Obama's online campaign.

The U.S. president followed an influential social media election strategy in the 2008 contest. He repeated this success in 2012.

Teddy Goff, who led Obama's digital strategy team in 2008 and 2012, appeared last March in Istanbul to share his secrets for success.

On the sidelines of "The Target: Mass" meeting, he told Anadolu Agency that political parties should form messages to reach out to undecided voters.

"In the course of a particular election, it is very unlikely to convince the other camp," he said.

Goff said the message formed by political parties has to be true before anything else. "The message has to be true factually and emotionally," he said, adding that the right balance should be struck to deliver a message.

"Everybody is different. So, you do not always give them facts or funny things. Engage with them in a way [which] feels right for the moment, subject matter, for the individual."

Although there has been increased activity among political parties on social media, they still trust the power of the mass media in convincing people.

The CHP's Candemir and the HDP's Karavil say social media has not been a substitute for mass media or conventional means.

"If we use it [social media] properly, we can get a right outcome," Candemir says, acknowledging that social media's role in electioneering has risen compared to previous contests.

However, she underlines that face-to-face campaigning in Turkey still matters more.

He warned political parties to use social and traditional media "in balance" to deliver their on political promises. "The new media is not enough," he claims.
Last Update: May 14, 2015 6:16 pm
RELATED TOPICS