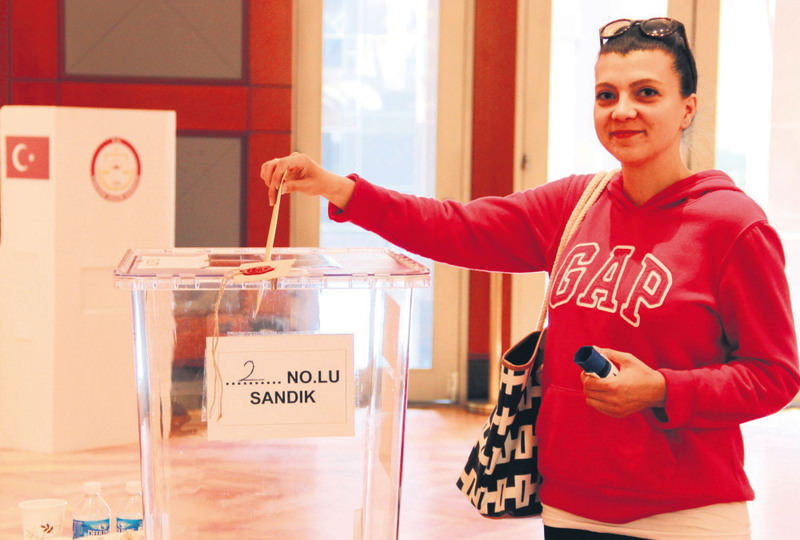 Turkey has effectively entered the general election season and will go to the polls on June 7. Turkish voters abroad began voting as of May 8 with election fever gripping expat Turks and a considerable turnout is expected

Full-scale election campaigns are underway in Turkey as the general elections draw nearer. The June 7 elections are being closely monitored abroad as well with a considerable number of Turkish expats going to the polls. Voting abroad is expected to play a critical role in the upcoming elections and will likely have an impact on the results. Turkish voters abroad are estimated to comprise 1 million votes in the upcoming elections, and expat Turks have already been gripped by voting fever as they began voting from May 8.

The majority of the voters abroad are expected to support Justice and Development Party (AK Party).

The Turkish expat vote is deemed critical as it has the potential to change the Constitution and bring about the aspiration of the ruling party to switch to a presidential system, or assist the Peoples' Democratic Party's (HDP) ability to surpass the 10 percent election threshold and pave the path for their entrance into Parliament. Aware of the potential of the votes, Republican People's Party (CHP) Chairman Kemal Kılıçdaroğlu, Nationalist Movement Party (MHP) Chairman Devlet Bahçeli and HDP Co-Chair Selahattin Demirtaş kicked off their election campaigns by holding their first rallies in Germany. Prime Minister Ahmet Davutoğlu also paid a visit to the country on May 3, addressing Turkish citizens in Dortmund and asking for their support. The party leaders seek to garner votes from Turkish citizens living abroad by offering them a chance to choose their representatives.

Turks living abroad are able to cast their ballot four weeks before the June 7 election at consulates and embassies in many countries.

The Supreme Election Board announced earlier that 112 polling stations would be opened in 54 countries to serve the almost 3 million Turkish nationals living abroad.

According to the Foreign Ministry, more than 5 million Turks live abroad, including around 4 million in Western Europe, 300,000 in North America, 200,000 in the Middle East and 150,000 in Australia.

Those eligible are able to vote at 112 polling stations in 54 countries between May 8 and May 31, while polling stations for Turkish expats are open at border posts and airports until June 7.

Turks in abroad, who were able to vote for the presidential elections in August, will be able to vote in a general election for the first time. Previously they had to travel to Turkish border gates to cast their ballot.

Discussions of the possible results of the upcoming June 7 general elections mostly focus on two questions, one being whether the AK Party will gain enough seats in Parliament to lead as a single party, and the other whether the Peoples' Democratic Party (HDP), which is vying to pass the 10 percent election threshold hurdle, will make it into Parliament. In order to form an opinion about what is expected in Turkey in the highly critical elections, the people have resorted to polling companies' predictions.

Besides the pollsters, political analysts are delivering their opinions on whether the AK Party, even as the leading party, can receive enough votes to have 400 deputies in Parliament, a target that will pave the way for the party to change the Constitution and bring in a presidential system. The HDP, on the other hand, which entered the elections as a party – many believe taking a risk – is in pursuit of breaking the 10-percent election threshold. The HDP, which is also carrying out the reconciliation process the government launched in a bid to solve the Kurdish question, as a mediator, is building its election campaign to garner more votes from particular target sections of the electorate that are more likely to vote for them, making promises honing in on these specific sections. The HDP recently vowed to close the Directorate of Religious Affairs to appeal to the Alevi community, which is not willing to be attached to the body. HDP Co-Chair Selahattin Demirtaş also kicked off his election campaign in Berlin, where he called on the Kurdish-Turkish electorate to help the party pass the threshold. The CHP, on the other hand, is leaning on economic issues to attract voters. However, it is often criticized for making populist promises, and their ability to realize the promises has been called into question.
Last Update: May 27, 2015 9:42 pm
RELATED TOPICS