Support for AK Party drops by more than 8 percent, single-party gov't not possible in Turkey 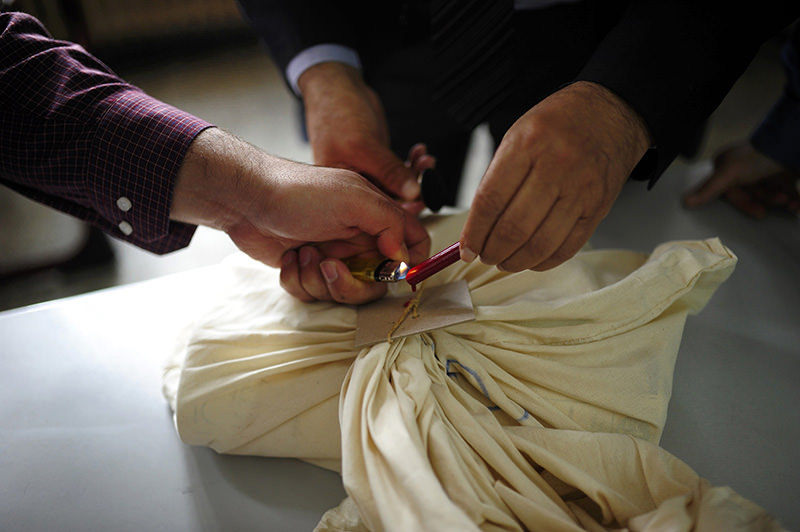 Election officials seal a bag filled with ballot papers at a polling station during the parliamentary election in Istanbul, Turkey, June 7, 2015 (Reuters)
by Daily Sabah with Wires Jun 07, 2015 12:00 am
Turkey's Sunday parliamentary election suggests that four major parties will enter the parliament. With more than 99 percent of the votes counted, the ruling Justice and Development Party (AK Party) was well ahead of other parties with 41.18 percent, gaining the party 256 seats in the parliament, just below the threshold of 276 seats, the bare minimum to retain a simple majority in parliament. The results, therefore, suggest that a coalition government is awaiting Turkey.

According to the results, the Republican People's Party (CHP) received 25.23 percent of the votes, the Nationalist Movement Party (MHP) 16.48 percent, and the pro-Kurdish People's Democratic Party (HDP) 13.19 percent of the votes. This was the first election that HDP entered the race as a unified party.

More than 53 million voters in Turkey and abroad were eligible to choose the deputies to the Grand National Assembly. AK Party would need a majority of 330 seats of the total 550 to call for a national referendum to change the constitution. With 367 seats, it would be able vote in a change without a referendum.

AK Party received around 49 percent of the vote in general elections in 2011. If the current trend holds, it would be first time that the party is faced with falling short of a majority to rule alone since it came into power in 2002.

HDP's apparent leap above the 10 percent threshold, puts it into a significant position in the parliament, with 79 seats. The party won seats greatly at the cost of the ruling party's current majority, making constitutional change on AK Party's terms unlikely.

The deputy chairman of Turkey's opposition Nationalist Movement Party (MHP) said on Sunday it was too early for him to say whether it would consider forming a coalition government with the ruling AK Party.

The MHP has long been seen as the AK Party's most likely potential partner.

"It would be wrong for me to make an assessment about a coalition, our party will assess that in the coming period. I think the AK Party will be making its own new evaluations after this outcome," MHP deputy leader Oktay Vural was quoted as saying.