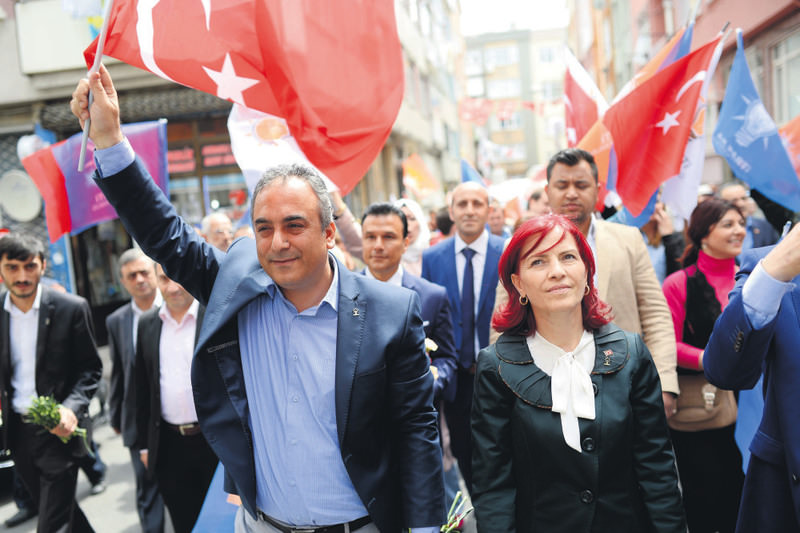 Markar Esayan (L), an Armenian-Turkish journalist was elected from the AK Party list in Istanbul's second region.
by Fatih Şemsettin Işık Jun 08, 2015 12:00 am

Minority communities get greater representation in the Parliament as four Christian and two Yazidi figures have become deputies after Sunday's general elections. Also the number of female parliamentarians has set a record with an increase from 79 to 96

Following the parliamentary elections that took place on Sunday, the percentage of women in Parliament has risen from 4 percent to 18 percent, which is the highest rate ever in Republican history. While 98 women will be in Parliament for the next four years, the winner of the elections, the Justice and Development Party (AK Party), has the lion's share in female representation with 42 deputies. Among them, Dilek Öcalan, who is the niece of imprisoned PKK leader Abdullah Öcalan, draws attention by being elected from Turkey's southeastern province of Şanlıurfa from the pro-Kurdish Peoples' Democratic Party (HDP) list.

When it comes to the proportional distribution of women in Parliament, the HDP comes first with around 40 percent of their deputies while the AK Party and Republican People's Party (CHP) follow it with 16.27 percent and 16 percent, respectively. The Nationalist Movement Party (MHP) has the lowest amount of female deputies in Parliament with around 5 percent.Additionally, 19 female deputies with headscarves are another eye-catching point from the elections. Ravza Kavakçı Kan, sister of Merve Kavakçı, who was forcefully removed from Parliament in 1999 during her inauguration for wearing a headscarf in the chamber, was elected from Istanbul's first region from the AK Party list. Fatma Benli, a lawyer and women's rights activist, who was among the victims of the Feb. 28, 1997 postmodern coup, was elected from Istanbul's second region from the AK Party list. Dr. Leyla Şahin Usta from the AK Party, who was the first woman to bring a case against Turkey to the European Court of Human Rights concerning the ban on headscarves in universities as well as Hüda Kaya and Seher Akçınar Bayar from the HDP are other women with headscarves in Turkey's 25th Parliament.

Meanwhile, minority groups' achievement in sending deputies to Parliament is another success story. After a long absence, three members from the Armenian minority and one from the Assyrian community will be represented in Parliament. While Markar Esayan, an Armenian-Turkish journalist was elected from the AK Party list in Istanbul's second region, Selina Doğan from the CHP was elected from the same region from the CHP's Istanbul list. Also, Garo Paylan and Erol Dora, both from HDP were elected in Istanbul and Mardin, respectively. Furthermore, alongside the four Armenian deputies, two members of Turkey's Yazidi community, Feleknas Uca from Diyarbakır and Ali Atalan from Batman, both from the HDP, were also elected.

The journalists who became parliamentarians from both the AK Party and CHP are another result of the elections. Hüseyin Yayman, who was a journalist at Vatan daily, was elected in Istanbul from the AK Party list and Enis Berberoğlu, who is a former editor-in-chief of Hürriyet daily, won a seat from Istanbul for the CHP. Utku Çakırözer, who is a former editor-in-chief of Cumhuriyet daily became a CHP deputy for Eskişehir and Orhan Miroğlu, a veteran journalist, writer and Kurdish political figure was elected in Mardin for the AK Party. There will also be also several disabled representatives in Parliament. CHP Istanbul deputy Şafak Pavey will again be in Parliament and AK Party Bursa deputy candidate Bennur Karabulut was elected as another disabled representative.
Last Update: Jun 09, 2015 4:47 pm
RELATED TOPICS