Early elections could result from a coalition government 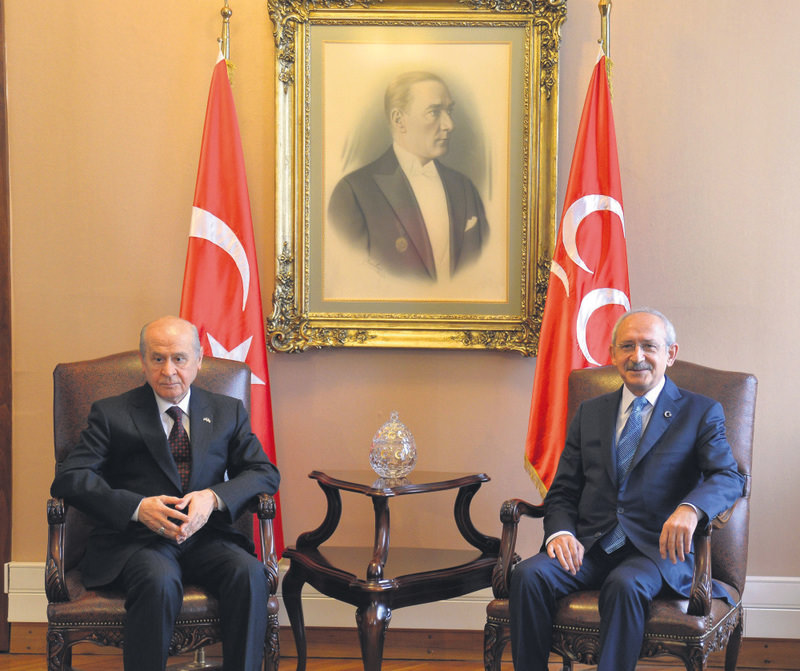 As the winner of Sunday's elections, the AK Party will seek a coalition partner since it could not receive sufficient seats to form a government singlehandedly. However, a coalition could suffer from conflicting party policies and lead to early elections

Turkey went to the polls on June 7 to choose its lawmakers for the country's 25th Parliament, shaping the future of Turkish politics. The two significant outcomes of the elections were that the Justice and Development Party (AK Party), which was vying for a fourth term, had a clear victory but failed to secure the 276 seats required to form a government single-handedly and the Peoples' Democratic Party (HDP) attempt to pass the 10 percent election threshold to make its way into Parliament, crushing the hurdle and receiving 80 seats in the chamber. Although the AK Party is the winner of the elections, receiving 40 percent of the votes, roughly 15 percent more than the Republican People's Party (CHP) which received the second highest number of votes, some interpret the elections as a failure of the ruling party as its rate dropped 8 percent from 49 percent in the 2011 general elections. Since the bare minimum to retain a simple majority in Parliament was not achieved, the AK Party will look for a coalition partner to form a government, which appears to be a tough job taking into consideration the rigid differences between the policies of the parties that entered Parliament.

The HDP receiving 13 percent of the vote has come as a surprise to many as predictions were that it would either remain below the 10 percent election threshold hurdle or would pass it by a hair's breadth. The success of the pro-Kurdish party purportedly is based on two main factors. Its ability to gain such support, marking a first in Turkish history, derives from the trust it could gain from its Kurdish base whose votes used to flow to the AK Party and the support it received from voters who solely wanted the AK Party to not gain a sufficient majority to bring in the presidential system that President Recep Tayyip Erdoğan and the AK Party has been touting along the campaigning.

Deputy Prime Minister Bülent Arınç, speaking a day after the elections, claimed that the HDP was a project among the opposition just to cripple the success of the AK Party. He said there was a blatant alliance between the opposition parties before the elections and was impatient to see how they will form a coalition. Arınç drew attention to the lack of critical comments against the HDP during the campaigning by the CHP and MHP, saying this indicated that they were implicitly supporting the pro-Kurdish party just to enhance their ability to beat the AK Party.

Early indications suggest that the election results, which most likely require the formation of a coalition government, will have detrimental repercussions. The sharp differences between the parties in both principles and policies could obstruct a government from being soundly formed. The AK Party, which is expected to begin negotiating with a party to form a government, has already been given a negative response by the MHP, which increased its votes compared to the 2011 elections. The MHP received 16 percent of the vote and increased its votes by roughly 3 percent as the rise of the HDP in parallel enhanced votes for the MHP in reaction to Kurdish nationalism.

Analysts see the nationalist MHP as the most likely coalition partner for the AK Party in the new Parliament, however MHP Chairman Devlet Bahçeli spoke after the election results were clear and ruled out being part of a coalition.

Bahçeli said: "The MHP is ready to be a main opposition party to a possible AK Party-CHP-HDP coalition.

As for the chances of a CHP and AK Party coalition, CHP Deputy Haluk Koç said there is no possibility that the CHP will be a part of that coalition government. The statement came right after the HDP also ruled out a coalition with the AK Party. With growing pessimism for forming a coalition government, other possible scenarios are being discussed.

Even in the condition of a green light to the AK Party from the parties for a coalition, agreement on certain issues is deemed highly improbable.

The AK Party, unlikely to shelve its priorities of bringing in a presidential system and new constitution, will likely find all parties against forming a coalition with it. As to the reconciliation process the government has been pursuing to end the Kurdish question, an MHP and AK Party coalition will suffer from two conflicting policies over the matter. An HDP and AK Party coalition may have a common stance on the pursuit, but will dissent on the presidential system issue. The possibility of a tripartite coalition of the CHP, MHP and HDP would also suffer from the conflict of Turkish and Kurdish nationalism. All these possible scenarios are uncertain and could likely lead to early elections.

What is the reconciliation process?

The reconciliation process, which was launched by the government to end the decades-long conflict between the state and the outlawed PKK, has recently been on a shaky ground due to resistance by the PKK to convene a congress to lay down its arms after receiving an order by its imprisoned leader, Abdullah Öcalan.

The PKK, which was expected to announce its disarmament before the June 7 general elections, as Öcalan ordered in his annual Nevruz message, have not abandoned arms, leading to a setback in the reconciliation process at a point when it was said to be about to reach a conclusion. Far from laying down their arms, the PKK has kept igniting aggression in eastern provinces.

Switching to a presidential system

Throughout modern Turkey's history, the governmental system has been a hotly debated issue that began with the eighth president, Turgut Özal, continued with the ninth president, Süleyman Demirel and has been brought up again by current President Recep Tayyip Erdoğan, who asserts that a presidential system is more applicable to the country's political structure.

In response to concerns voiced by opposition parties over whether a presidential system will preserve the separation of powers, Erdoğan said that checks and balances would be installed stronger than ever in a presidential system, which he has been claiming would be in the best interest of Turkey. Erdoğan also brought up the recent decision in Italy to put an end to coalition governments.

Turkey's current Constitution dates back to 1982 and was drafted after the 1980 military coup. Despite numerous revisions over the last 30 years, according to constitutional experts, it still bears the stamp of military tutelage. Therefore, drafting a new constitution was among the election pledges of the ruling AK Party in the 2011 general elections. A parliamentary commission was formed to draft a new constitution, with input from the social democratic Republican People's Party (CHP), pro-Kurdish Peoples' Democratic Party (HDP) and Nationalist Movement Party (MHP). Despite acknowledging the need for a new constitution, all four political parties in Parliament are equally represented in the commission, thus a consensus on key issues has been hard to find.
RELATED TOPICS