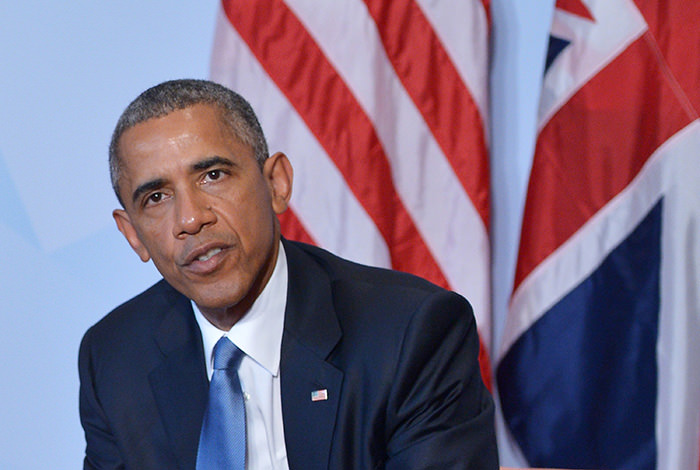 US President Barack Obama speaks during bilateral meeting with Britain's Prime Minister on the sidelines of the G7 Summit at the Schloss Elmau castle resort near Garmisch-Partenkirchen, in southern Germany on June 7, 2015. (AFP Photo)
by Ragıp Soylu Jun 09, 2015 12:00 am
U.S. President Barack Obama yesterday criticized Turkey for not fully ramping up the capacity needed to prevent the flow of foreign fighters to Syria and asked for better cooperation between the U.S. and Turkey, flustering Turkish officials who lost the majority in Parliament following the general elections on Sunday.

Speaking at a press conference in Germany after the G7 meetings, Obama said that to better counter the Islamic State of Iraq and al-Sham (ISIS), more concrete progress is needed to monitor the Turkish-Syrian border effectively. "We are still seeing thousands of foreign fighters flowing into, first, Syria, and then, oftentimes, ultimately into Iraq. And not all of that is preventable, but a lot of it is preventable – if we've got better cooperation, better coordination, better intelligence," he said.

Obama criticized Turkey on this front for the first time following the critical elections that have pushed the country in an unpredictable game of forming a coalition government between highly divided political parties.

Michael Werz, a senior fellow at the Washington-based think tank Center for American Progress, which has close ties to the Obama administration, said the White House was right to send this message at a time when discussions about a coalition government are beginning in Turkey. "Even though the cooperation has gotten better in past months, this issue has been dragging on for far too long," he said.

Former U.S. ambassador to Ankara Francis Ricciardone, who is currently the vice president of the Washington-based Atlantic Council, told Daily Sabah that he doubts that Obama was making any connection on this matter with the Turkish election results. "I took his comment as an observation of a reality as he sees it, not a matter of 'blaming' Turkey," he said.

However, statistics compiled by the Prime Ministry support the long-standing Turkish stance that Turkey had been using its full capacity to block the flow of foreign fighters going to Syria. According to the figures, more than 1,350 people have been deported and Turkey has issued exclusion orders for some 13,500 others from 98 countries. Turkey captured over 50,000 people who were trying to cross the borders illegally in 2013, 71,000 in 2014 and 23,500 others in the first five months of this year.

A senior Turkish official expressed his disappointment over Obama's statement and cited the poor U.S. performance in Syria for the last years. "It is not right to blame Turkey for the foreign fighters issue. We are sad to say that parties who didn't take initiative in Syria have a great responsibility. We would like to see more cooperation and support. It helps us to prevent more fighters from crossing the border. American support is a must," he said.

Despite his previous calls with different heads of state following their electoral victories, Obama has still not called Prime Minister Ahmet Davutoğlu to congratulate his electoral success.

Yesterday U.S. State Department spokesman Jeff Rathke implied that the Obama administration would implement a wait-and-see policy until the clear winner emerges from this political chaos in Turkey. He said that he was not going to speculate about the results of the election since the official results had not yet been announced.