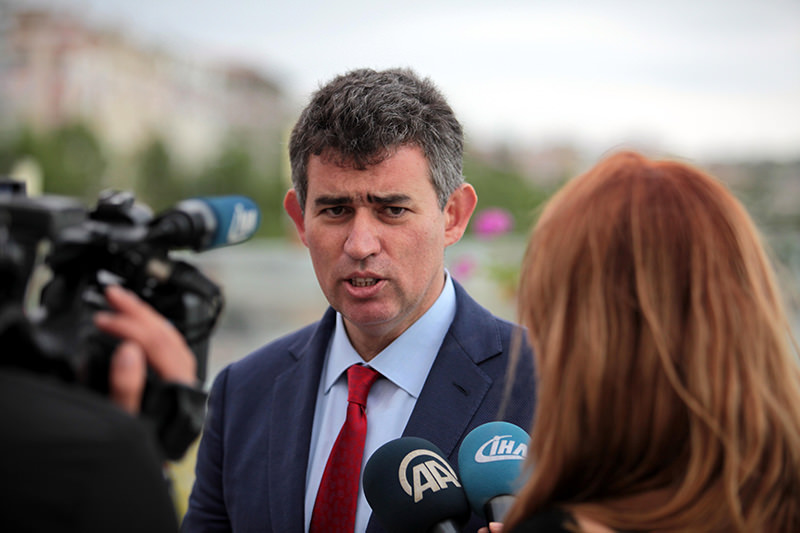 | AA Photo
by Fatih Şemsettin Işık Jun 10, 2015 12:00 am
Turkish Bar Association head Metin Feyzioğlu described the results of the June 7 parliamentary elections as a failure regarding the main opposition Republican People's Party (CHP), and called party members to convene for a general congress to choose a chairman.

Pointing out that CHP could not increase its votes or number of deputies and even dropped behind previous elections, Feyzioğlu said: "The dear president of the CHP and its party assembly should do the thing required of their principled stance. It has to convene a general congress immediately in which election results, coalition issues and tenets that will carry the party into power are discussed. The delegates will shape the party's future with an election."

He stressed that the possibility of the CHP being a coalition partner does not cover the poor result in the general elections, and said: "What we say directly and clearly is this: Even if coalition talks with other parties are going to be undertaken, the party members who hold these talks should not be chosen from among those who have an enthusiasm for a temporary coalition, but from the cadres who will carry the CHP into power alone: trustworthy, principled, representing the grassroots and who got a vote of confidence from the congress and again, instructed by the General Committee in the matter of coalition conditions."

Along with this development, it is also reported that the CHP is expected to convene in the forthcoming months. In the event of a congress, Yalova Deputy Muharrem İnce is again seen as a dissident with the potential to run for chairmanship against current leader Kemal Kılıçdaroğlu after the failure in Sunday's parliamentary elections.

İnce has said before that Kılıçdaroğlu is distant from the public and does not understand their demands and expectations, adding: "He does not think about leaving his post at all and has become a politician obsessed with his position." Although Kılıçdaroğlu pledged to resign if the CHP received less than 26 percent of the vote in the parliamentary elections, as soon as the election results were announced and the CHP's 25 percent was revealed, Kılıçdaroğlu said: "I am content with the results. There is no reason to leave the post. I will not resign."

The CHP suffered its sixth electoral defeat under Kılıçdaroğlu's chairmanship, a post he has held since 2010, in the elections that took place on Sunday. In the party's last extraordinary congress, which was held in September 2014, İnce ran for the chairmanship and lost to Kılıçdaroğlu. Yet the debates between him and Kılıçdaroğlu continued for a while. Reportedly, 300 CHP delegates signed for İnce to be a candidate for chairman at the congress, however 78 out of 81 CHP provincial chairmen declared support for the current party chairman in a joint statement to the press.