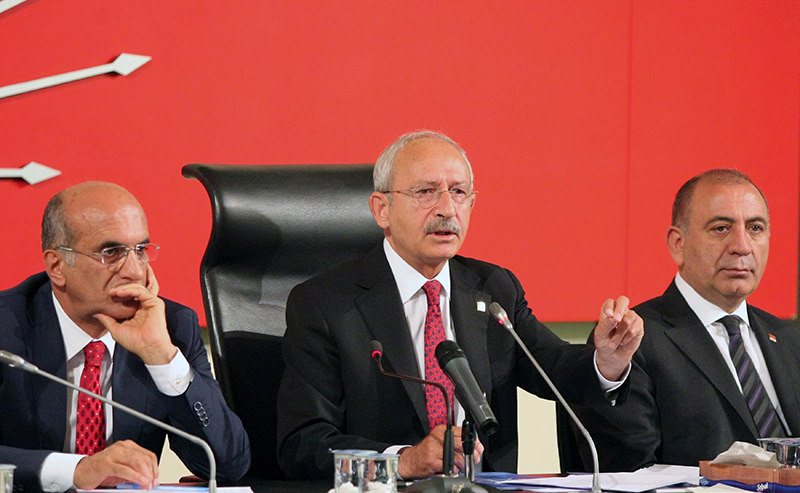 Kemal Ku0131lu0131u00e7darou011flu (C), chairman of Turkey's main opposition Republican Peoplesu2019 Party (CHP) gives a statement to the press before a council meeting in Ankara on june 15, 2015 (AFP Photo)
by Sinan Öztürk Jun 15, 2015 12:00 am
Kemal Kılıçdaroğlu, the chairman of the Republican People's Party (CHP), which received the second-most votes in the June 7 parliamentary elections, gave a press conference on Monday in which he outlined the CHP's position and points necessary to form a coalition.

"The duty to form a coalition rests on the 60 percent – the opposition bloc," Kılıçdaroğlu said. Urging other parties to announce their own points for forming a coalition, Kılıçdaroğlu said that they are not ignoring any political party. "We should think about Turkey, not the next election," he said.

For the CHP, the first point necessary to form a coalition is a solid legal system that ensures that the rule of law is upheld. Removing remnants of the Sept. 12, 1980 military intervention, including the 10 percent election threshold and the Higher Education Board (YÖK), is the CHP's second point. The legislation on political ethics to ensure corruption-free politics in Turkey makes up the third point and a strong social state is the party's fourth condition.

While criticizing President Recep Tayyip Erdoğan's statement that he may meet with all political party leaders, Kılıçdaroğlu announced the CHP's fifth point, in which the role of the president should be minimized in accordance with the Constitution and practices. Allowing discretionary funds for the exclusive use of the prime minister is the CHP's sixth condition.

The party's seventh condition is a new trend in foreign policy. Larger freedoms in terms of assembly and expression are the eighth and ninth conditions. The party's 10th condition is ensuring the freedom of the media. Kılıçdaroğlu criticized the current status of state broadcaster TRT and broadcasting watchdog Radio and Television Supreme Council (RTÜK), saying that the CHP does not accept the current model.

Neutral and fair tax inspections of private companies are the CHP's 11th point. Final account commission, founded within the Parliament and led by the opposition to examine the spending items of annual budgets by the government is the CHP's 12th point. The 13th point is a new constitution and a freer judiciary and the struggle against corruption is the 14th point.

The CHP, whose target was to gain 35 percent of the vote in the June 7 general elections, managed to maintain only a proportion of the vote it received in the 2011 elections. This has been billed as a failure even by the party's own base. Kılıçdaroğlu took center stage thanks to the populist election promises he made during campaigning. Leaning on economic issues, Kılıçdaroğlu aimed to gain votes by addressing economic concerns. The CHP's promises varied from a significant increase in the minimum wage, reducing diesel prices to TL 1.5 ($0.60), a poverty wage program for poor families and a family insurance project that aims to pay a certain amount to families with insufficient income. The CHP's most striking election promises were regarding the economy, as the party promised to increase the minimum wage from TL 949 ($354) to TL 1,500. The party also aimed to provide 1 million additional jobs in the near future and to reduce unemployment to under 5 percent and inflation to 4 percent.