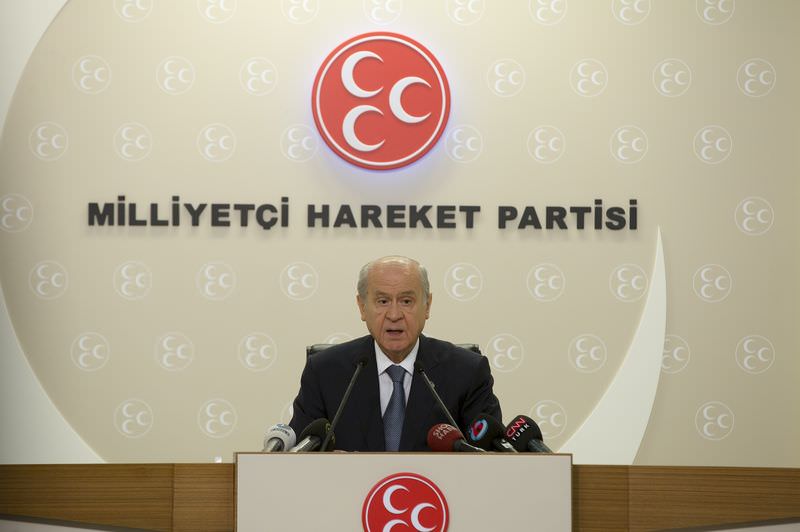 by Nurbanu Kızıl Jun 17, 2015 12:00 am
Chairman of Nationalist Movement Party (MHP) Devlet Bahçeli has criticized opposition leader Kemal Kılıçdaroğlu's remarks when he said four parties –which he claimed received 60 percent of the votes- should form the government and said the former's statements were "nonsense," while highlighting that the MHP will never join a coalition government with the pro-Kurdish HDP.

Speaking about the election results, Bahçeli stated that the '60 percent bloc' promoted by Kemal Kılıçdaroğlu, the chairman of the Republican People's Party (CHP) is empty talk. "If the government is going to be formed based on the total percentage of votes then there is no need for principles, ethics or dignity," Bahçeli added.

The opposition leader also stated that the MHP will not be included in a coalition government with the pro-Kurdish Peoples' Democratic Party (HDP).

"How can we form a government with the political messenger of a terrorist organization which ruthlessly kills babies, soldiers, police officers and thousands of innocent citizens?" Bahçeli said, noting that the MHP will never be on the same side with organizations which threaten the unity of the state.

He underscored that the CHP should not waste its time trying to persuade the MHP to form a coalition government with the HDP, and said doing so would do Turkey wrong.

Bahçeli also stated that the MHP does not have categorical objections, but has a number of principles, while adding that a minority government will not provide a concrete solution to form a government.

The HDP passed the 10 percent threshold with 13.12 percent, marking the first time it will enter the parliament as a party. It is accused of having relations with the outlawed PKK, which has carried out terrorist activities against Turkey for over three decades, resulting in the deaths of around 40,000 people. Turkey, the U.S. and the European Union list the PKK as a terrorist organization.

The AK Party won its fourth consecutive general election on June 7, securing the largest number of votes to claim 258 seats in Parliament, 18 short of a simple majority, according to the unofficial results.

Although the AK Party won the elections by receiving over 41 percent of the votes, the support it gained from voters was not sufficient for the party to reach a majority needed to form the government on its own, which has led it to seek a coalition partner.