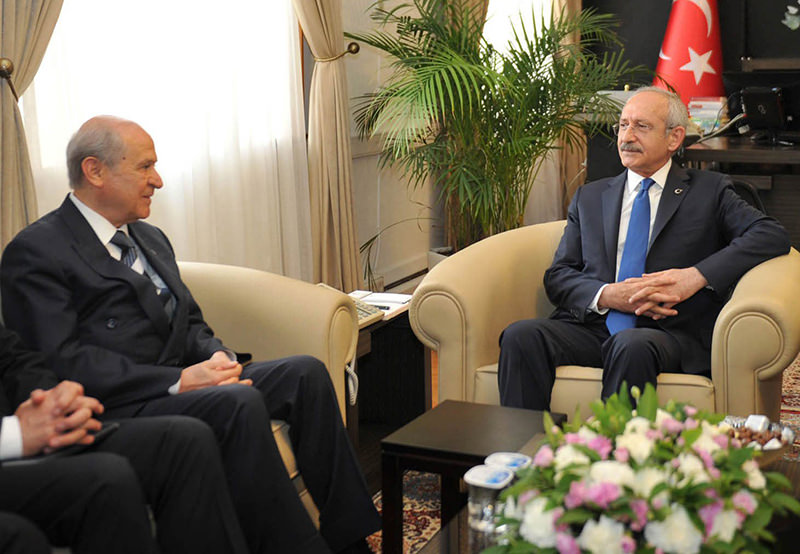 To coax MHP Chairman Bahçeli to be part of a CHP-MHP-HDP coalition, CHP Chairman Kılıçdaroğlu offered him the prime ministry, a proposal that was turned down as MHP officials said the party could not give up its ideology in exchange for the post

Kemal Kılıçdaroğlu, the chairman of Republican People's Party (CHP) has allegedly asked Nationalist Movement Party (MHP) leader Devlet Bahçeli to be the prime minister of the coalition government which would be established between the opposition parties in case the ruling AK Party cannot form the government. According to Turkish Hürriyet daily, Kılıçdaroğlu suggested that Bahçeli take the seat of the prime minister in a bid to convince the MHP to form a coalition government with the pro-Kurdish Peoples' Democratic Party (HDP), or a minority government with the support of the HDP which the MHP has consistently refused based on ideological differences.

In response to a question about how the MHP would agree to HDP's support, considering its strong opposition against the reconciliation process, Kılıçdaroğlu said that Turkey has countless problems which need to be solved, and politics was the "art of finding solutions".

Kılıçdaroğlu claimed that there were commonalities between the election pledges of the CHP, MHP and HDP, and added that they could take crucial steps towards resolving the problems in Turkey through these common principles. The opposition leader also stated that his party has no hesitation regarding early elections, while he noted that the June 7 elections gave political party leaders the authority to form a government. "We have to take this into consideration and find a way to reconcile," Kılıçdaroğlu added.

MHP's Group Deputy Chairman Yusuf Halaçoğlu on Friday responded to Kılıçdaroğlu's proposal and said that Bahçeli would not give up his principles for the sake of becoming prime minister.

"Prime ministry is of secondary importance for Devlet Bahçeli" Halaçoğlu was quoted as saying at the Turkish Grand National Assembly (TBMM).

He added that Bahçeli would serve the country without becoming the prime minister if he has to and signaled that the MHP leader would not accept Kılıçdaroğlu's suggestion.

"Our chairman stated that we will not join a coalition with the HDP" Halaçoğlu said, noting that the offer to become prime minister would not change MHP's stance on entering a coalition government with the pro-Kurdish HDP.

Earlier this week, the chairman of Nationalist Movement Party (MHP) Devlet Bahçeli criticized Kılıçdaroğlu's remarks when he the latter said four parties –which he claimed received 60 percent of the votes-- should form the government. and Bahçeli stated that the MHP will not be included in a coalition government with the HDP. "How can we form a government with the political messenger of a terrorist organization which ruthlessly kills babies, soldiers, police officers and thousands of innocent citizens?" Bahçeli said, noting that the MHP will never be on the same side with organizations which threaten the unity of the state. He underscored that the CHP should not waste its time trying to persuade the MHP to form a coalition government with the HDP, and said doing so would do Turkey wrong.

On June 7, the HDP passed the 10 percent threshold with 13.12 percent of the votes, marking the first time it will enter the parliament as a party. It is accused of having relations with the outlawed PKK, which has carried out terrorist activities against Turkey for over three decades, resulting in the deaths of around 40,000 people. Turkey, the U.S. and the European Union list the PKK as a terrorist organization.

The AK Party won its fourth consecutive general election on June 7, securing the largest number of votes to claim 258 seats in Parliament, 18 short of a simple majority, according to the unofficial results. Although the AK Party won the elections by receiving over 41 percent of the votes, the support it gained from voters was not sufficient for the party to reach a majority needed to form the government on its own, which has led it to seek a coalition partner.
Last Update: Jun 19, 2015 7:51 pm
RELATED TOPICS