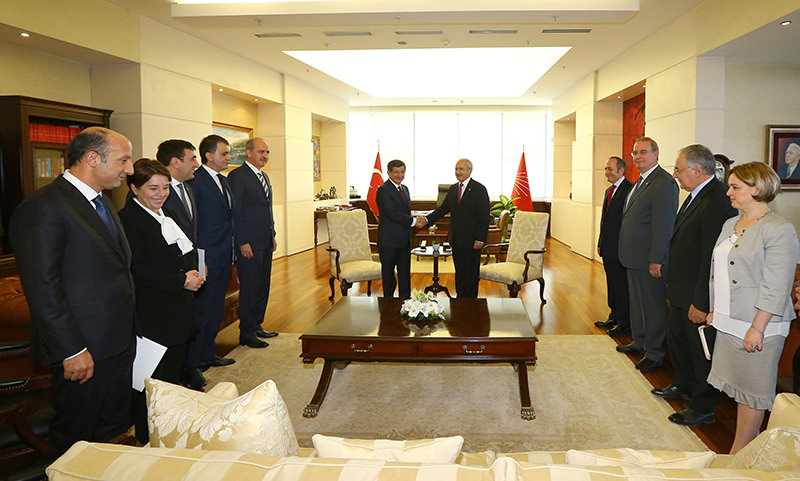 | AA Photo
by Daily Sabah Jul 13, 2015 12:00 am
Prime Minister Ahmet Davutoğlu has started coalition talks on Monday and paid his first official visit the chairman of Republican People's Party (CHP), Kemal Kılıçdaroğlu to see whether he can team with the long-standing opposition.

Following the meeting, Davutoğlu held a press conference in prime ministry. Pointing out that it was a meeting before coalition negotiations to establish an environment of peace in the first round of coalition talks, Davutoğlu said that the party officials will conduct meetings before proceeding into the second round.

"We have reached a common understanding (with CHP) to pursue talks based on mutual trust and a strong government" Davutoğlu said.

"Until we will establish a coalition government, we will try to remain at an equal distance to all parties."

Davutoğlu stated that the status of President Erdoğan was not discussed in the meeting, adding that he will not discuss the legitimacy of a post that has appointed him to form a government.

Answering to a question regarding the recent attacks of PKK terrorist organization and the statement of PKK's umbrella organization KCK ending its unilateral cease fire, Davutoğlu stated Turkey never announced a ceasefire, and is ready to take necessary steps against threats and blackmail. Referring to pro-Kurdish Peoples' Democratic Party (HDP) leader Selahattin Demirtaş's interpretation of KCK's statement limiting its aim with dam and road projects, Davutoğlu stated that Turkish government, authorized by the people's will, carry out such projects and will not back down on anyone's threats.

Following the AK Party - CHP meeting, CHP's Spokesperson Haluk Koç also held a press meeting where he said, he and Ömer Çelik, the former Culture Minister would be in touch for further coalition talks between the two parties. He also reiterated CHP's previous statement that the party would never be the address of a deadlock regarding the coalition talks.

Davutoğlu is scheduled to meet with the Nationalist Movement Party (MHP) on Tuesday, which has so far openly expressed that it wants to remain as the main opposition, and will head to the pro-Kurdish Peoples' Democratic Party (HDP) on Wednesday to talk over a partnership, which Davutoğlu had said was a remote possibility.

The 45-day countdown began after Erdoğan gave Davutoğlu the mandate to form a government, which requires him to negotiate with other parties. Davutoğlu, who has been largely enthusiastic over a coalition, has said that although he will not exclude any party from negotiations, he will hone in on the CHP and MHP during the talks. He said if the talks failed to reach a conclusion in the first round, he will come to them again and push his luck for a partnership. If deal is not hammered out, then early elections will be inevitable.