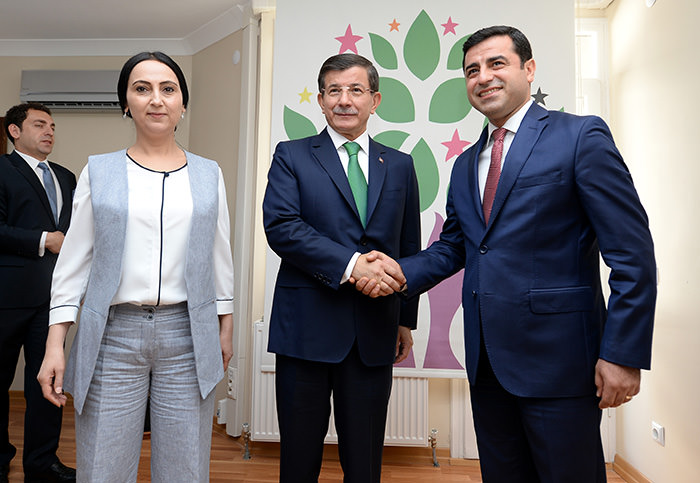 The Prime Minister held a press conference after the meeting, during which he said, the AK Party team had a "successful consultation" with the HDP deputies and HDP entering the Parliament should be used for Turkey's benefit.

Davutoğlu has also touched upon the on-going reconciliation process and said, the promises regarding the process need to be fulfilled. He stated that all armed elements of the outlawed PKK organization should exit Turkey's borders.

Davutoğlu has also referred to HDP co-chairman Demirtaş's comments on private Turkish TV station, HaberTürk, on Tuesday evening. Demitaş had said that the HDP would tell the PKK to disarm, but the organization would not listen to them if concrete steps would also not be taken by the government.

Upon Demirtaş's comments, Davutoğlu said, "Firstly, you need to keep telling them [to disarm] until they listen. If the process will continue, it is assumed that you are affective. If you have no affect [on PKK's laying down arms], there is no point in meeting."

"If you [HDP] have no influence [on the PKK], through which means will you contribute [to the reconciliation process]?" Davutoğlu said.

HDP, which for the first time passed the 10 percent threshold as a party in June elections, currently stands as a "strong group" in Parliament, according to Davutoğlu.

The AK Party has undertaken a wide variety of democratic reforms regarding the Kurdish issue in Turkey, and with HDP representation in Parliament, Davutoğlu asked a question of why an armed group (PKK) still exists in the country.

Turkey's so-called reconciliation process refers to the efforts by the government, launched in 2013, to end the decades-old conflict with the outlawed Kurdistan Workers' Party (PKK) in the country's eastern and southeastern regions; this has resulted in a call for a congress for disarmament from jailed PKK leader Abdullah Öcalan.

HDP's Ankara deputy Sırrı Süreyya Önder has also held a press conference after the meeting with the AK Party team. Touching upon the reconciliation process, Önder said, the process cannot be handled apart from government issues and currently it is Turkey's key issue. Önder also said that the HDP will adopt a constructive approach to a possible AK Party – CHP coalition.

Davutoğlu met with the main opposition Republican People's Party (CHP) Chairman Kemal Kılıçdaroğlu on Monday to hold the first of several discussions on a potential coalition. The first of talks to form a coalition government after no party gained a clear majority in the general elections last June took place at the CHP headquarters in the capital Ankara on Monday afternoon.

"The meeting was held in a sincere and friendly atmosphere. I would like to express my gratitude to Mr. Kılıçdaroğlu," Davutoğlu said in a press conference after the meeting, adding that no bargain or negotiations were made during the first round of talks. Saying that "mutual trust" and "formation of a strong government" were core points made during talks with the CHP.

PM Davutoğlu also met with the Nationalist Movement Party (MHP) leader Devlet Bahçeli as part of coalition negotiations on Tuesday. The MHP remained opposed to participating in any coalition talks, continuing an uncompromising stance with regards to being part of a possible coalition government.