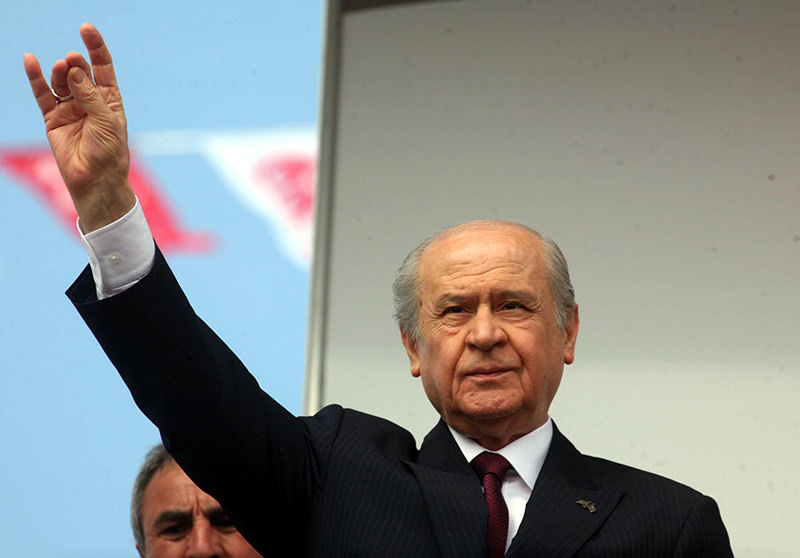 | DHA Photo
by Daily Sabah Jul 22, 2015 12:00 am
Turkey's Nationalist Movement Party (MHP) signaled on Wednesday the start of a general election campaign in the country's central province of Kırıkkale.

The party's leader, Devlet Bahçeli said, "We are not afraid of early elections. We gave the start signal [for election campaign] in Kırıkkale."

Bahçeli made the comments during a round of consultations with the MHP's provincial branch, a move which is widely considered as a sign of preparation for a possible early election.

The MHP received 16 percent of the votes in the June 7 general elections, and the party has since reiterated its position that it wants to stay out of a coalition government. Analysts had in fact for long seen the MHP as the most likely coalition partner for the AK Party in the new parliament, but following last week's meeting with Prime Minister Ahmet Davutoğlu, the party leader Bahçeli repeated again his opinion of not being a part of a coalition government. Bahçeli indicated that the public has given the MHP the position of being the main opposition rather than forming a coalition.

The real question is now if an early election is on the horizon. Bahçeli must have thought that this is the case since he started the party's election campaign without even awaiting the results of how the AK Party's second-round coalition talks will proceed with the Republican People's Party (CHP).

The AK Party held the first-round of coalition talks last week with all the other parties in the parliament. But, various AK Party officials stated that with the MHP and Peoples' Democratic Party (HDP) out of the picture of a coalition, the odds of establishing one seem higher with the CHP.