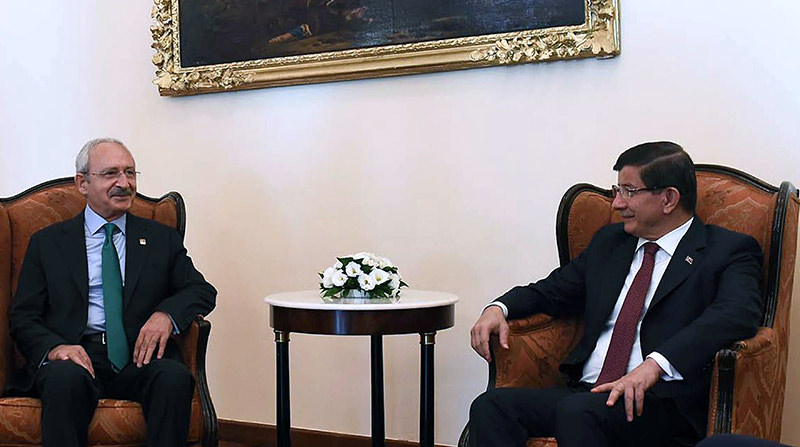 by Daily Sabah Aug 13, 2015 12:00 am
Coalition talks between the Justice and Development Party (AK Party) and Republican People's Party (CHP) ended unsuccessfully on Thursday. Prime Minister Ahmet Davutoğlu said in a press conference afterward that the AK Party tried its best to not leave Turkey without a government.

"I'm sure that our nation witnessed this," Davutoğlu said. While speaking at the press conference Davutoğlu made it clear that the talks ended unsuccessfully saying: "Snap elections have become the only option for Turkey. It is obvious that the AK Party and CHP have deep conflicting opinions. This is only natural. We have come to the conclusion that the groundwork for a government partnership has not materialized." He cited "profound differences, mainly in foreign policy and education," as the reasons for the failure to materialize a coalition.

A senior AK Party official has said the chances of a coalition with the Nationalist Movement Party (MHP) are "very slim" and that early elections in November are highly likely. Davutoğlu has called his party's Central Executive Board (MYK) for an emergency meeting following the final meeting with CHP Chairman Kemal Kılıçdaroğlu. Davutoğlu also said at the press conference that the perception that President Recep Tayyip Erdoğan did not want a coalition was "completely false."

Erdoğan told a reception for local community leaders at the presidential palace in Ankara on Thursday: "We tried, and are trying, to keep our hope for the formation of a coalition government, which will put forward solutions to issues."

After 35 hours of exploratory talks between the delegations and a meeting on Monday between the chairmen of both the AK Party and CHP, the public was only a meeting away from finding out the ultimate decision that will determine Turkey's next government.

While all eyes will be on the post-meeting news conference, Davutoğlu on Tuesday at the Medal of Honor awarding ceremony for the Chief of General Staff Gen. Necdet Özel said that nobody should expect a historic statement, giving an early signal of the failed negotiations with the CHP. He however still added: "We are still working on the formation of a coalition government." Furthermore, Davutoğlu expressed his satisfaction with the process carried out in a civilized and polite way with mutual understanding that left no room for offensive remarks from either delegation.

In response to a question about whether the AK Party will hold a meeting with the MHP, Davutoğlu said: "I said in the beginning that we are not going to cut off communication with any party. If needed, we are going to hold a meeting. After reviewing the situation [with the CHP], we may consider that. We are in a place where everyone should take responsibility. I will do anything [I should] as I am given the mandate to form a government."

Touching on the alleged tension in politics among parties, Davutoğlu blamed the pro-Kurdish Peoples' Democratic Party (HDP) for being indecisive on the PKK, saying: "There is no tension in politics at all except for the HDP. The reason for this is the indecisive behavior of the HDP over terror incidents. We call on them to condemn the attacks."

Meanwhile, Kılıçdaroğlu on Tuesday held a meeting with the executives of several trade unions. According to Turkish media, Kılıçdaroğlu reportedly said that he was not expecting a coalition. Prior to the CHP and AK Party chairmen's meeting, MHP Chairman Devlet Bahçeli released a written statement that said: "These two parties should not avoid taking on the huge responsibility that history has placed on them, and should show their will and attention to form a government in line with national interests."

Turkey went to the polls on June 7 to choose its lawmakers for the country's 25th Parliament, shaping the future of Turkish politics. The two significant outcomes of the elections were that the AK Party, which was vying for a fourth term of single-party power, had a clear victory but failed to secure the 276 seats required to form a government single-handedly and the HDP attempt to pass the 10 percent election threshold to make its way into Parliament, crushing the hurdle and receiving 80 seats in the chamber.

Although the AK Party got the most votes, receiving 40 percent, roughly 15 percent more than the CHP, which received the second highest number of votes, some interpreted the elections as a failure of the ruling party as its rate dropped 8 percent from 49 percent in the 2011 general elections. Since the bare minimum to retain a simple majority in Parliament was not achieved, the AK Party started looking for a coalition partner to form a government, which appeared to be a tough job taking into consideration the rigid differences between the policies of the parties that entered Parliament. Throughout its political history Turkey has experienced 20 coalition governments, the longest of which lasted three-and-a-half years.