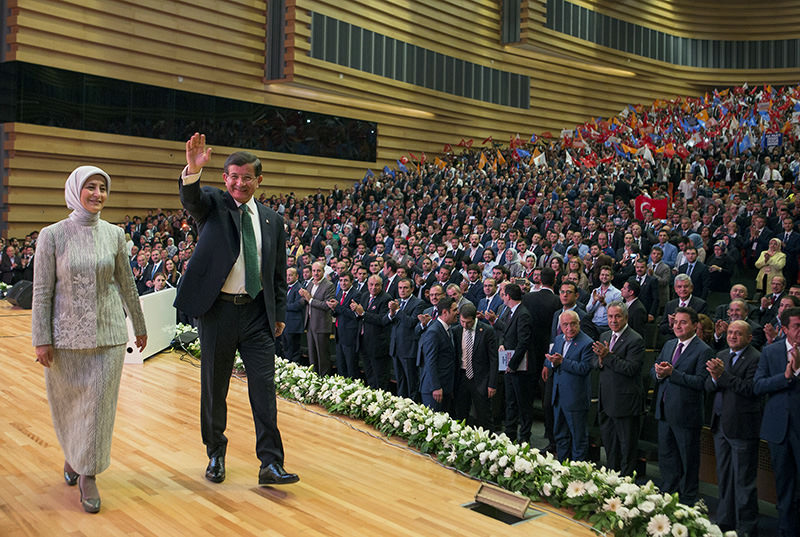 PM Davutoğlu announced the AK Party’s election manifesto in which the party pledges comprehensive reforms to the judiciary, more equality, a new constitution and the status of cemevis, saying the party had been founded with a reformist perspective

With the Nov. 1 early elections approaching, interim prime minister and Justice and Development Party (AK Party) chairman, Ahmet Davutoğlu, announced the party's election manifesto on Sunday at the Ankara Chamber of Commerce (ATO) with pledges to reform the judiciary, Constitution and equality. Davutoğlu stated that the party's manifesto was prepared with a reformist perspective, based on protecting human dignity, rights and freedoms, and that the government will continue to fight the PKK until public order is restored and the group buries all its weapons.

The AK Party's election manifesto, which includes 25 topics, provided comprehensive pledges for women, youth and retirees. Davutoğlu emphasized the importance of the June 7 elections and said they provided the opportunity for the AK Party to re-evaluate itself. He described the AK Party manifesto as being prepared with the participation of the nation. He also said the June 7 elections showed all political parties that doing politics in Turkey is not possible without the AK Party.

He said the manifesto was prepared not only with a reformist perspective, but also by prioritizing democracy, rule of law, human rights and freedom. While one of the hottest topics on the political agenda was the establishment of a new constitution, the AK Party's election manifesto promises a new constitution that secures basic rights and freedom, while coordinating with international agreements
During the party's election manifesto meeting, Davutoğlu said the principle of equal citizenship was prioritized with aims to provide a libertarian and civil constitution. The AK Party's manifesto also includes pledges for the country's European Union accession process and promises to expedite the procedure.
He further pledged that the Supreme Council of Judges and Prosecutors (HSYK) will be restructured as the Supreme Council of Judges and Supreme Council of Prosecutors. As one of the most debated topics throughout elections in Turkey has been the 10 percent national election threshold for a party to enter Parliament, the AK Party promises to readjust it under the framework of establishing stability and justice in the country.

Regarding Alevi communities, Davutoğlu promised to take all necessary actions to address their needs and the problems they face. He further announced that all cemevis – Alevi places of worship – will be granted legal status similar to other places of worship. "We will take all necessary steps to address the needs of our Alevi brothers and sisters. No citizen of this country will be alienated based on their cultural background," Davutoğlu said.

"Until public order is restored and terrorists bury all their weapons, the AK Party's combat against terror will continue," Davutoğlu said. Saying that Turkey is the country of stability and security in the region, Davutoğlu urged for unity. Furthermore, he said that while the AK Party seeks comprehensive reform for the judiciary, the party will devotedly continue the reconciliation process, as the nation wants peace.

Pledging to continue the government's devoted efforts to combat the "parallel structure" – referring to the Gülen Movement – Davutoğlu explained that the party's manifesto says the country is in need of a new dynamic ruling system. In this regard, he said a presidential system is more suitable for Turkey. In the framework of a presidential system, the AK Party aims to remove the current political parties law and establish a new law. Davutoğlu added that the political ethics law will be removed and transparency of funds provided to deputies and municipalities will be further enhanced.

The AK Party's economic pledges in the manifesto include a promise to provide up to TL 50,000 ($16,719) for youth who have work projects. Additionally, the AK Party promises to provide general health insurance for university graduates for two years.

Continuing with the pledges, Davutoğlu announced that pensioners will be provided an extra TL 1,200 every year. The party also announced that minimum wage will be increased to TL 1,300, but is subject to increase in line with the level of danger the job poses.