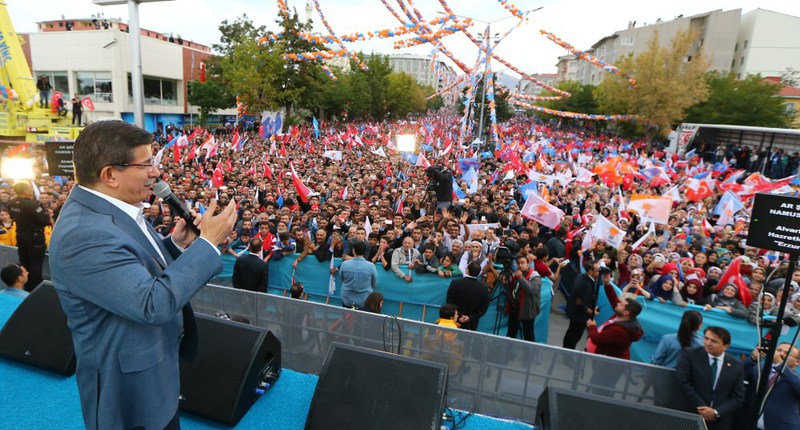 by Daily Sabah Oct 07, 2015 12:00 am
Prime minister and Justice and Development Party (AK Party) chairman, Ahmet Davutoğlu started his party's election rallies in the northern province of Samsun where he introduced several pledges from the party's election manifesto. Responding to criticism about the financial sources for the party's pledge of increasing the minimum wage to TL 1,300 ($436) per month, Davutoğlu said: "They're questioning the source. The source is in the people. We decreased the 11.5 percent government budget deficit in 2002 to 1.3 percent in 2014," promising that there will be a budget surplus in 2017. Davutoğlu had previously said pensioners will be provided an extra TL 1,200 every year. The party also announced that the minimum wage will be increased to TL 1,300, but is subject to increase in line with the level of danger the job poses.

About the promise to provide up to TL 50,000 for youth who have work projects, Davutoğlu said: "We will give TL 50,000. We will not require a repayment. We will give TL 100,000 interest-free if needed. We trust our youth." Additionally, the AK Party promised to provide two-year general health insurance for university graduates.

Concerning the bloody activities of terrorists in the country in the last couple of months, he said: "We will create public order in Turkey along and facilitate national unity and fraternity. We will not make concessions for those who want to discriminate for instance as Turk against Kurd or Sunni against Alevi." In the meeting where he announced the party's election manifesto on Oct. 4, regarding Alevi communities, Davutoğlu had promised to take all necessary actions to address their needs and the problems they face. He further announced that all cemevis – Alevi places of worship – will be granted legal status similar to other places of worship. "We will take all necessary steps to address the needs of our Alevi brothers and sisters. No citizen of this country will be alienated based on their cultural background," Davutoğlu said."Until public order is restored and terrorists bury all their weapons, the AK Party's combat against terror will continue," Davutoğlu said. Saying that Turkey is the country of stability and security in the region, Davutoğlu urged for unity. Furthermore, he said while the AK Party seeks comprehensive reform in the judiciary, the party will devotedly continue the reconciliation process, as the nation wants peace.

In a meeting that his party organized in the eastern province of Erzurum, Davutoğlu brought up the coalition talks after the June 7 general elections and said his party was sincere about finding a solution, but its interlocutors were not. "We conducted coalition talks with the Republican People's Party [CHP], but they wanted different policies for education and foreign policy.
RELATED TOPICS