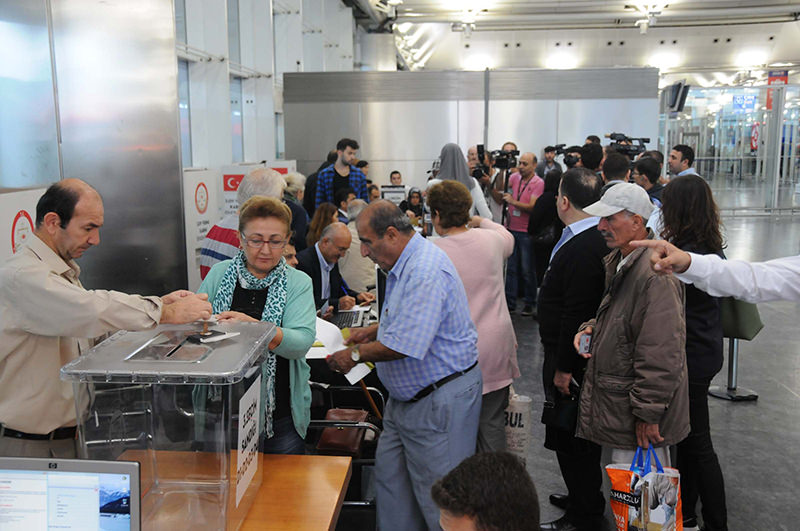 The first Turkish citizen (Sema Aslantau015f) casts her ballot at Atatu00fcrk Airport on October 8, 2015 (DHA Photo)
by daily sabah
Oct 08, 2015 12:00 am
Turkish citizens living abroad have started casting their ballots at airports and customs gates, almost a month before the election date in Turkey, which will take place on November 1.

Ballot boxes were set up at the Kapıkule, Hamzabeyli, Ipsala and Dereköy customs gates in the western Turkish border province of Edirne and Kırklareli, as well as Atatürk Airport in Istanbul.

Officials said they did not expect "intensive" voting due to it being the end of summer which sees many expatriate Turks returning to their overseas residences.

One Turkish voter living in Germany, Sema Aslantaş, said: "Let's cast votes no more," a reference to the June 7 general election in which no political party was able to take office.

Ibrahim Berber said he was living in the German city of Bremen and said: "I am thinking the elections are very precious and important; I wanted to contribute and am happy."

Turkish couple Huseyin Emeksiz and his wife Meral were among those citizens who cast their votes at Atatürk Airport.

"We are happy to have cast our votes and I hope the right [to govern] goes to who is righteous and who works," said Huseyin Emeksiz.

Turkey is heading for an early general election after no party succeeded in creating a ruling coalition after the June 7 contest.

More than 54 million people will be eligible to vote on Nov. 1.