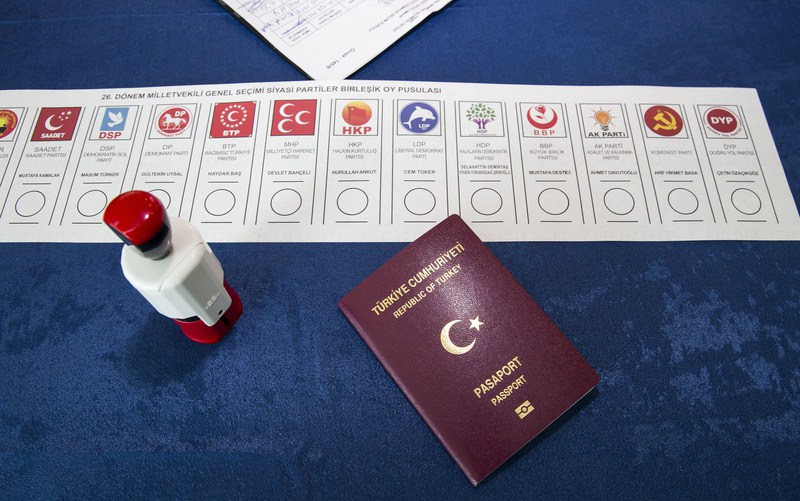 When compared with the June 7 general elections, the number of casted votes for the November 1 snap elections by Turkish voters living abroad increased by 233,000 and the participation rate reached 43.7 percent.

The number of votes casted in Germany alone, home to the largest Turkish community living outside of Turkey, increased by 100,000 votes and 19 percent, while in the Netherlands, France, Belgium and the U.K. the increase in votes were respectively 37, 000, 30,000, 9,000 and 7,000. The number of Turkish voters registered abroad was 32,000 more when compared to the June 7 elections.

Turkish voters were able to cast their votes between October 5 and October 28 in 54 countries and 113 Turkish representations.

Turkish citizens who are registered abroad will also be able to cast their votes in customs gates until the polls are closed at 5:00 p.m.
Ballot papers will be flown by chartered aircraft to Turkey on Tuesday to be counted after the national polls close on Sunday evening.

90 polls were open in Germany, which had 1.41 million registered Turkish voters.

Additionally, Turkish expats broke a record in voter turnout in the U.K. for the general elections.

Just under 43 percent of eligible voters registered in the U.K. voted at polling stations in London and Edinburgh as well as airports and border crossings in Turkey between Thursday and Sunday. Figures released by the Turkish consulate in London showed that a total of 37,150 voted over four days -- most at London's Olympia Exhibition center where 32,519 votes were cast. In Edinburgh, there were 1,042 registered ballots while 3,589 voted at polls at border points in Turkey, which remain open in the run-up to the Nov. 1 vote.

Speaking to Anadolu Agency, Başar Şen, Turkey's consulate general in Berlin, praised the participation of voters to the election as some voters had 200 or 300 kilometers-distance with the polling stations.

The participation rate in the 2014 European Parliament elections was 43 percent, even though voting by mail was allowed.

The Justice and Development Party (AK Party) Istanbul Deputy and Overseas Election Coordination Center Chairman Mustafa
Yeneroğlu stated that this election is the third one after the 2014 presidential elections and the June 7 general elections in which Turkish voters living abroad were allowed to vote. Yeneroğlu said in many polling stations, the participation rate was over 50 percent, while thankingvoters for their increased interest in the elections.