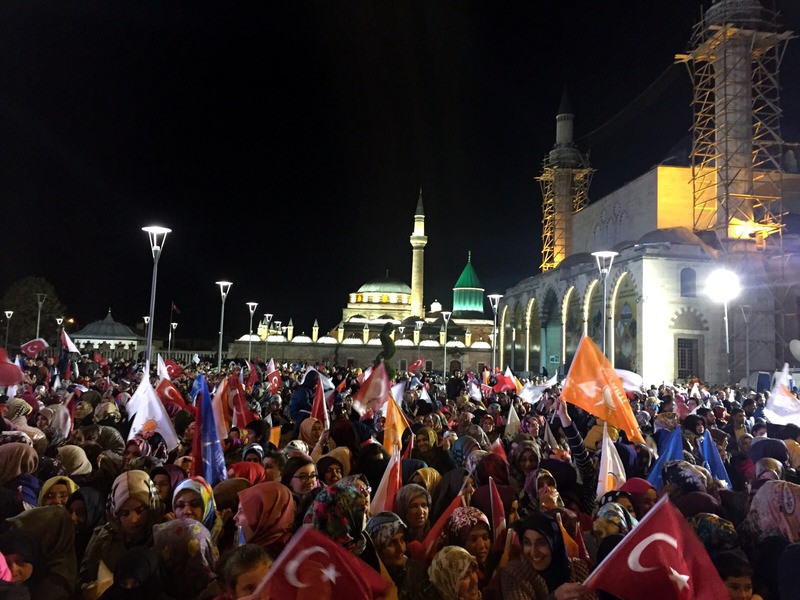 AK Party supporters gather in Mevlana Square, Konya to celebrate their party's victory in the November 1 polls. (AA Photo)
by Daily Sabah Nov 01, 2015 12:00 am
Leading in 63 provinces across Turkey, the Justice and Development (AK) Party not only remained victorious but also saw a substantial increase in votes in the Central Anatolia region in Sunday's polls.

The AK Party gained 300,000 more votes-amounting to a 7% increase- in the capital city, Ankara when compared to the June 7 elections.

The AK Party also led a landslide victory in Prime Minister and AK Party Chairman Davutoğlu's hometown Konya with 74.30%, gaining a further 10% of votes in the province since the last election.

The AK Party also increased its number of voters in Karaman, Niğde, Sivas and Çankırı by 10%.


However, one of the biggest gains for the leading party was Eskişehir; with a 7% increase in votes the AK Party surpassed main opposition the Republican Poeople's Party (CHP) with 43.27% of the votes and managed to get three deputies in total.

The Nationalist Movement Party (MHP) lost votes in all Anatolian provinces with it's biggest losses being Yozgat (a 15% decrease), Aksaray (a 13% decrease), Nevşehir and Kayseri (nine percent), closely followed by Nevşehir, Kırşehir and Karaman.

Meanwhile, the People's Democratic Party (HDP) witnessed a decline in votes from Central Anatolia, mostly around a one to two percent loss. However, in Niğde and Karaman the HDP gained new voters, reaching about 2% in these provinces compared to the June elections.