AK Party swept back into power in a landslide 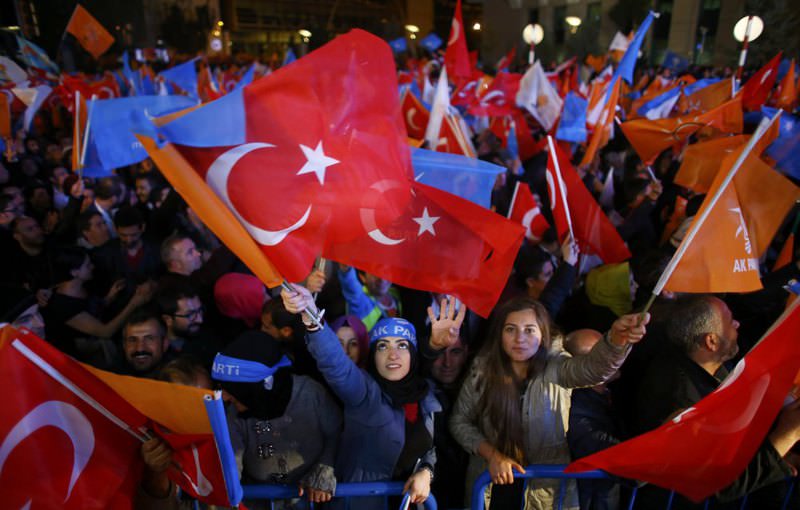 "This victory is not ours [AK Party], but that of our nation and our citizens," PM Davutoglu said hours after preliminary results put the AK Party ahead of the other parties. After months of failed coalition negotiations, millions flocked to ballot box, giving the AK Party 317 deputies in the 550-seat Parliament

The Justice and Development Party (AK Party) clinched victory after securing slightly more than 49 percent of the vote in Turkey's 26th general elections on Sunday. The party's votes are higher than the other three parties represented in Parliament combined.

Following the June 7 elections in which the AK Party garnered 40.8 percent of the vote and failed to receive a parliamentary majority with 258 deputies, the parties failed to come to an agreement to form a coalition, leading Turkey to an early election on Nov. 1. Prime minister and AK Party chairman, Ahmet Davutoğlu, described the party's success in Sunday's parliamentary elections as a "victory day for democracy." "This victory is not ours [the AK Party's], but that of our nation and our citizens," Davutoğlu said in an address in his hometown of Konya hours after the results put the AK Party ahead of the other parties.

Greeted by a cheering crowd in Konya, he said he was optimistic about the upcoming four-year term. "I would like to express gratitude to God. Today is a day of triumph, but today is also a day of modesty," he told the crowd near the tomb of Sufi saint Mevlana Jalaluddin Rumi. Opposition parties saw important decreases in their votes. The main opposition Republican People's Party (CHP) brought a series of lists to coalition negotiations with the AK Party, including a dramatic shift in foreign policy and the education system.

Following two months of sour negotiations, the parties announced they could not agree on forming a coalition government. The AK Party then went to the third largest party, the Nationalist Movement Party (MHP) and its chairman, Devlet Bahçeli, who opposed forming a coalition, extending support for snap elections and a parliamentary vote to hold early elections.

On the other hand, the pro-Kurdish Peoples' Democratic Party (HDP), which had successfully passed the 10 percent national election threshold and promised in its rallies prior June 7 to disarm the PKK, took a harder pro-PKK stance and its co-chair, Selahattin Demirtaş, said his party is "not in a position to disarm the PKK." The party also refused to be part of any coalition government with the AK Party. The party's stance on PKK terror drew harsh criticism from all segments of the society, including those in Kurdish-majority areas who vote for the HDP to give the party a chance to a party for the whole of Turkey. In Sunday's polls, the party saw a dramatic decrease in its votes of about 2.5 percent, leaving the AK Party over a dozen more deputies in predominantly Kurdish regions of the country than it had received in the June 7 elections.

In the provinces of Mardin, Tunceli, Muş, Batman, Siirt, Şırnak, Hakkari, Van, Ağrı, Iğdır and Bitlis the HDP has come out as the leading party, whereas in Kars and Ardahan the AK Party surpassed the HDP. However, the AK Party increased its votes by nearly 10 percent in the HDP stronghold of eastern and southeastern provinces compared to the June 7 elections.

The MHP took the biggest hit in the Nov. 1 elections compared to June 7, its vote share plummeting from 16.29 percent to around 11.9 percent, whereas HDP votes declined from 13.12 percent in the June 7 elections to around 10.64 percent.

The AK Party was the winner of the election in the Black Sea region. In the region's biggest city, Samsun, the AK Party's votes increased almost 11 percent from the June 7 general elections, receiving 63.5 percent of the vote in the coastal city. In another one of the biggest cities in the region, Trabzon, AK Party votes increased 11 percent from the last election, up to 66 percent of the vote in the city.

Millions of Turkish citizens flocked to ballot boxes on Sunday to have a say in the country's political future. Election fever had engulfed the public, which chose its lawmakers to form the 26th Parliament. There were a total of 54,049,940 voters, 50.7 percent of whom are women.

Electoral committees across the country's 81 provinces, divided into 85 voting districts – Istanbul, Ankara and İzmir provinces have multiple districts – started the vote count after polls closed at 5:00 p.m. local time. According to preliminary results, the number of ballots opened as of 8:35 p.m. local time was 174,554 out of 183,518 across Turkey, which is about 95.12 percent of the votes.

The preliminary voter turnout stood at 86.76 percent. The preliminary results were released after the Supreme Election Board (YSK) lifted a broadcast ban at 7:00 p.m. local time.

More than 54 million citizens were eligible to vote in the elections to elect 550 deputies to Parliament. A total of 183,518 polling stations opened and nearly a million citizens living abroad cast their ballots at 113 embassies and consulates.

Of the 16 parties registered to contest the election, preliminary results suggest four parties passed the 10 percent threshold to gain seats in Parliament.

Ninety ballot boxes were open in Germany, which had 1.41 million registered Turkish voters. Additionally, Turkish expats broke a record in voter turnout in the U.K. for the general elections.
Last Update: Nov 02, 2015 12:12 pm