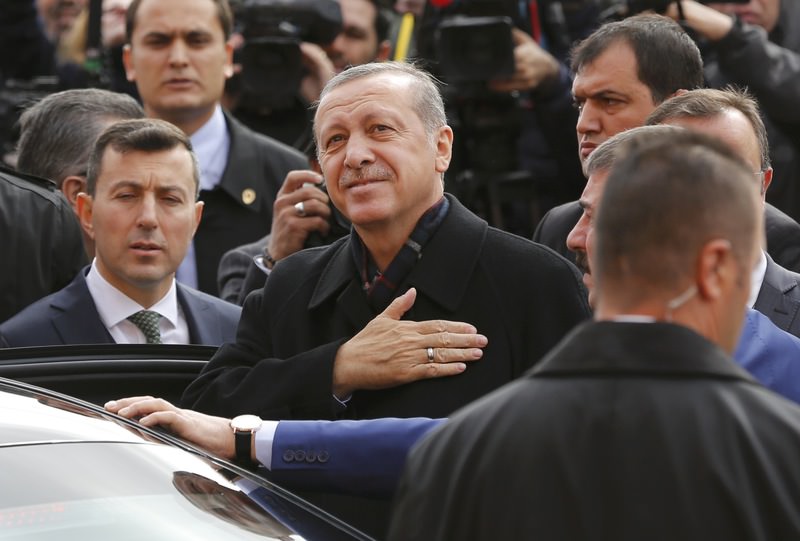 by daily sabah
Nov 02, 2015 12:00 am
President Recep Tayyip Erdoğan said Sunday's election result, in which the AK Party regained the majority in Parliament, showed that the Turkish nation had chosen to protect an environment of stability and confidence.

The president said in his statement that the nation gave the most important message to the terrorist PKK that "violence, threats and bloodshed cannot coexist with democracy and the rule of law."

Another important message from the results was for the parties who received the second and third most of the votes. "The nation showed their displease of those parties' uncompromising attitude during the coalition talks after the June 7 elections," he said.

Erdoğan also congratulated Prime Minister Ahmet Davutoğlu for his party's outright victory in the elections and offerred gratitude to the Turkish nation for protecting Turkey's future and the goals set for 2023.

Erdoğan also celebrated the elections results on his personal Twitter account through messages he sent personally and signed with "RTE," the initials of his name. "I congratulate all our political parties that joined the November 1 elections and all our citizens who ensured the will of the nation is displayed with their votes. I congratulate the AK Party, which will form a single-party government, and its Chairman and Prime Minister, and my brother Ahmet Davutoğlu. I thank each individual of our nation who protected Turkey's future and 2023 goals through the will put forward in the ballot box. I wish the November 1 elections will be beneficial for our country and nation."

Prime Minister Ahmet Davutoğlu responded again from Twitter saying "Dear President, we are committed to bring this blessed cause to further onward. May democracy victory of November 1 bring goodness."