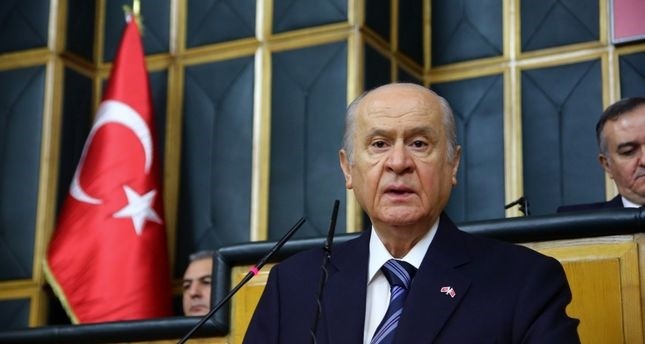 Nationalist Movement Party (MHP) Chairman Devlet Bahçeli, who has already expressed his support for constitutional changes, has called for snap elections if the changes are to fail in the Parliament.

The MHP leader said early Thursday that even though the path for constitutional change seems certain to gain approval, there should be snap elections if something unexpected comes out of the voting.

"It now seems that the package will be accepted with over 330 votes, which will allow a referendum. Nevertheless, if it fails to do so, we should have snap elections," Bahçeli said.

Speaking to reporters at Parliament, Bahçeli said he does not expect any drop in the number of "yes" votes for the constitutional changes.

Bahçeli commented on the brawl during the voting for the changes as well, stressing that the tense atmosphere in Parliament is an intended strategy.

"The tension in Parliament could spread across Turkey during the referendum process," he warned.

The country's parliament on Thursday adopted the fifth article of a new constitutional reform package. The article was endorsed by 343 of the assembly's 550 lawmakers. Seven others rejected it, three papers were left blank and one vote was deemed invalid.

Thirteen more amendments proposed by the ruling Justice and Development Party (AK Party) will be voted on in Parliament.

To reach a referendum, the proposed changes must first be passed by 330 deputies. If it gets the support of 367 lawmakers, it qualifies to pass into law without a referendum, although the AK Party has said it would hold a popular vote regardless

Regarding Turkish military presence in Iraq's Bashiqa, MHP leader said that Turkey should not take a step back without achieving results.

Since March 2015, about 150 soldiers and up to 25 tanks have been stationed in Bashiqa to protect Turkish servicemen training Iraqi volunteers to fight Daesh. Turkey has pointed out that the soldiers were not assigned to combat duties, and that the country would do all it could to prevent the operation from deepening sectarian conflict on its borders.