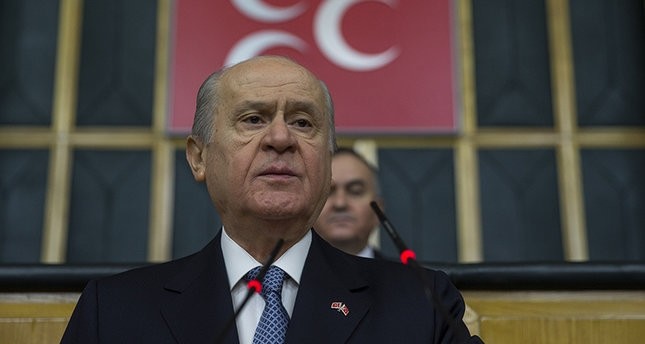 Explaining why the MHP will vote in favor of the constitutional reform in the upcoming referendum, the party's leader Bahçeli showed the constitutional amendment in 2007, election of the president by direct popular vote in 2014 and the July 15 coup attempt as reasons

Opposition Nationalist Movement Party (MHP) Chairman Devlet Bahçeli has explained why his party supports the constitutional amendment package and said they will vote "yes" in the upcoming referendum as a result of three critical events in Turkey's recent political history. Speaking at his party's parliamentary group meeting in Ankara on Tuesday, Bahçeli stressed that the MHP has undertaken a huge responsibility for the sake of the Turkish state.

"We are saying yes to the survival of the system, not to a person. We are not saying yes to a party, an ideology, a segment or a thought, but we are saying yes to the continuity of the Turkish Republic," Bahçeli said. Bahçeli also explained that there are three critical events in recent Turkish political history that lie behind his party's support for the constitutional amendment package that will allow the country to switch to a presidential system.

"The first event was the constitutional amendment in 2007. With this referendum, the public decided to choose the next president by public vote. The second event was on Aug. 10, 2014, when the president was directly elected by popular vote. The third and the most important event was the July 15 failed coup attempt last year that was perpetrated by the Gülenist Terror Group (FETÖ)," Bahçeli said.

"We will act according to the historical and social responsibilities that are imposed on us by these events," he added.

Underlining that the July 15 FETÖ coup attempt was a milestone in Turkish history, Bahçeli said it is not normal to expect the same political style after such treachery. "We saw the second Treaty of Sèvres in July. We returned from the edge, from a new attempt at invasion," he said.

Bahçeli's remarks came after the main opposition the Republican People's Party (CHP) criticized the MHP for following the line of the ruling Justice and Development Party (AK Party) and President Recep Tayyip Erdoğan. Stressing that his party remained unmoved in their stance on the presidential system, Bahçeli also slammed critics accusing the MHP of siding with the AK Party, saying such people side with the PKK terrorist organization and FETÖ.

The CHP, the pro-PKK Peoples' Democratic Party (HDP), as well as the PKK, FETÖ and the Revolutionary People's Liberation Party-Front (DHKP-C) have pledged to vote "no" in the upcoming referendum.

Bahçeli continued by saying the MHP would certainly choose to support President Recep Tayyip Erdoğan over the left-wing/neo-nationalist Patriotic Party led by Doğu Perinçek. "If we had a chance to choose between Doğu Perinçek and his pro-'No' comrades and Recep Tayyip Erdoğan, everybody should know that we would surely choose to support Erdoğan without exception," Bahçeli added.

The 18-article constitutional reform package supported by the AK Party and MHP deputies including the much-debated switch to the presidential system was approved by parliament on Jan. 21. The package was sent to President Erdoğan for approval last week and after will be put to vote in a national referendum likely to be held in early April.
RELATED TOPICS