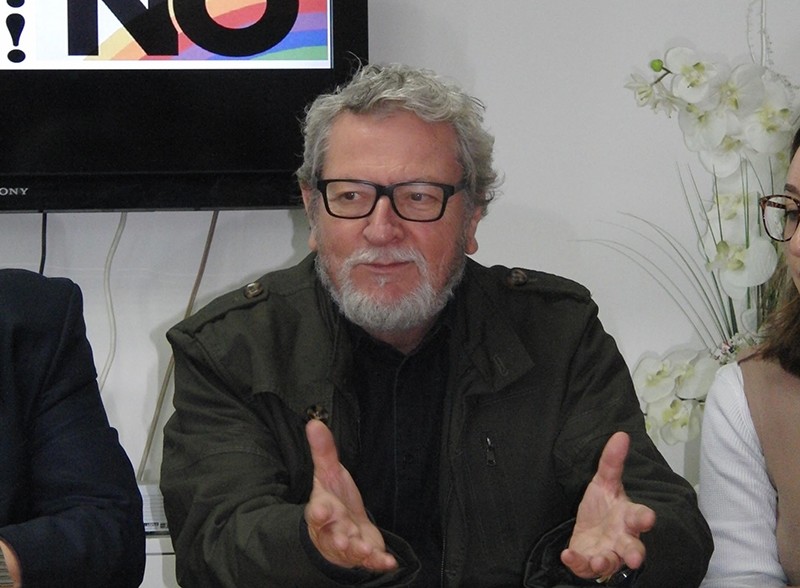 A Chilean publicity agent who came to Turkey upon an invitation by the main opposition Republican People's Party's (CHP) youth branch to promote its "No" campaign for the upcoming constitutional reform referendum said on Saturday that he does not understand the reason behind the "No" vote, to the surprise of the organizers who brought him to the country.

Francisco Garcia Ferrada is a famous Chilean advertiser who inspired the "No" movie about a plebiscite in Chile, when the people had to vote whether or not dictator Augusto Pinochet should remain in power or not in 1988 and he campaigned for a no vote.

Speaking at an event organized by the CHP's youth branch in Istanbul's Kadıköy district, Ferrada said that the CHP needs to provide a concrete promise behind their campaign.

"I have been in Turkey for a week now and I still do not understand what the 'No' vote suggests," Ferrada said, adding that the CHP cannot give a political message or even hope to the country if it cannot properly explain the reason behind their campaign.

Ferrada also stated the campaign he promoted was against a dictator and that the situation in Chile was quite different from Turkey today, contrary to statements by CHP officials who claim that a presidential system would be equal to a dictatorship.

"What I did back then was kind of like a publicity campaign against a dictator, but the situation here is different," Ferrada said, in remarks likely to anger CHP Chairman Kemal Kılıçdaroğlu.

The Chilean advertiser told the audience that the CHP needs to appeal to all voters and cultures and leave aside personal ambitions and egos.

The CHP is the strongest political player in the "no" camp. The party strongly objects to the proposed constitutional amendments and instead favors a strengthened executive role for Parliament.

Sources close to the CHP reported that the party's district and provincial bodies as well as municipalities, were ready to make joint efforts with other political parties siding with the "no" campaign, including the pro-PKK Peoples' Democratic Party (HDP), which also opposes the proposed changes to the constitution.

The ruling Justice and Development Party (AK Party) and the Nationalist Movement Party (MHP) are in favor of constitutional change, and will promote the "Yes" campaign.